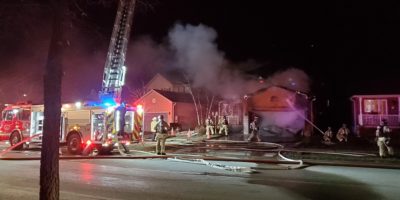 No reports of any serious injuries following a fire on Country Lane Monday night.

Firefighters were called to the home between Esther Dr. and Heritage Ct. around 8:40 Monday evening, arriving to find smoke billowing out of the two-storey home.

Barrie Fire is on scene at a home on Country Lane near Esther Dr. in south #Barrie, dealing with a fire on the go. No reports of any injuries. Cause not immediately apparent.@Barrie_Fire @BarriePolice pic.twitter.com/6lAgLy7UMp

The call was immediately upgraded from a one- to a two-alarm when fire crews arrived, followed by an aggressive attack on the blaze coming from the home. The most apparent damage appeared in the house’s garage. Barrie Police assisted by closing area roadways.

BFES is on scene of a structure fire in the area of Country Lane. Fire upgraded to 2nd Alarm on arrival. Please avoid the area. pic.twitter.com/CfP939uqox

Assistant Deputy Fire Chief Ed Davis told Barrie 360 over the phone Monday evening that investigators are to be called in to look for a cause of the fire. He added that Barrie Fire’s A Platoon did a great job of containing this fire to a single structure, not allowing it to spread.

Great job by “A” platoon crews tonight in battling this structure fire. Faced with heavy fire and smoke upon arrival, they fought to contain this to a single structure @Barrie_Fire @BarriePFFA @cityofbarrie https://t.co/iaicCKizl9