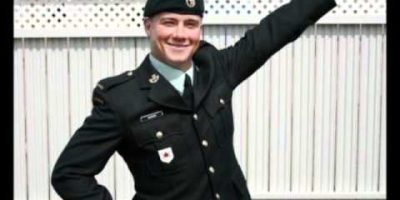 Silver Cross Mother Beth McKay and her husband Fred will lay a wreath at the Royal Canadian Legion in Barrie on Remembrance Day in memory of their son, Pte. Kevin McKay.

He was 24-years-old and two days from the end of his tour of duty in Afghanistan when he was killed by an improvised explosive device on May 13, 2010.

Kevin grew up in the Horseshoe Valley area of Oro-Medonte Township, and was a graduate of Eastview Secondary School in Barrie, and he also completed a two-year carpentry course at Georgian College.

Fred says his son joined the military at the age of 21.

“He wanted to make sure that the kids in Afghanistan had a chance to go to school. He didn’t think it was right that children were having acid thrown in their faces when they arrived at school, and teachers were being murdered for being teachers.”

Fred says Kevin and the troops were to have been flown out by helicopter from their combat outpost, but a volcano explosion in Iceland created a layer of ash and cloud that meant they had to stay in their location for a few extra days until the sky cleared.

“Kevin volunteered for his last night patrol when he was killed,” says Fred.

The troops were to go from one combat outpost to another at the end of a village, about a kilometre in length, and to check buildings along the way for weapons, as well as money that was used to finance the insurgency in Afghanistan. The patrols usually took several hours.

“They had their night vision goggles and had just cleared a two-storey building,” says Fred. “They got word over the radio that one of the drones had spotted an insurgent planting a bomb in the field, so they had the green light to make contact with the person.”

“They hustled down the outside of a staircase from the second floor to the ground level and the bomb went off at the bottom of the stairs.”

Fred says his son was a good guy who often smiled and laughed easily.

“He loved his brother-in-arms, and they loved him back.”

Fred says his son liked to cook for them, and he always made sure they had a hearty meal before and after their patrols.

11-years since the death of Kevin, Fred says time helps, but it doesn’t completely diminish your sense of loss.

“I am the luckiest man in the world because I lost one fine young son, but I have another fine young son, and he lives near Edmonton. He’s an architectural designer, and he makes us very proud. If we didn’t have him, then it would have been a much rockier road.”

Afghanistan is once again under Taliban rule. Even so, Fred believes the sacrifice his son gave was not wasted.

He points out the Canadian military was responsible for building 55 schools in Afghanistan.

“The Taliban are not afraid of guns and bombs; they’re afraid of school children with school books.”

Fred says Canadian soldiers should be very proud of what they accomplished because they gave children in Afghanistan a 20-year window in which they could get an education.