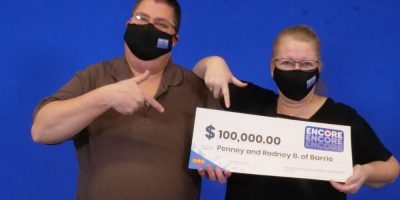 News release – from the OLG

Saying “yes” to ENCORE paid off for Penney and Rodney (Rod) Bailey of Barrie. They matched the last six of seven ENCORE numbers in exact order in the December 24, 2021 LOTTO MAX draw to win $100,000!

Penney and Rod, a married couple, said they were at the store checking a couple weeks’ worth of tickets when they discovered their big win. “I scanned my ticket using the Ticket Checker and saw ‘Big Winner’ appear on the screen with a bunch of zeroes,” shared Rod while at the OLG Prize Centre in Toronto to pick up their winnings. “I signed my ticket right away and handed it to the store clerk, still not knowing exactly what we won.”

Penney said when they realized the amount they won she started to cry and jump up and down while Rod stood in awe. “The other customers in the store were so excited for us, we were all fist bumping.”

The pair plan to share their good fortune with their children, pay some bills and plan a trip when the pandemic ends. “I’m super excited – It still doesn’t feel real!” said Penney.