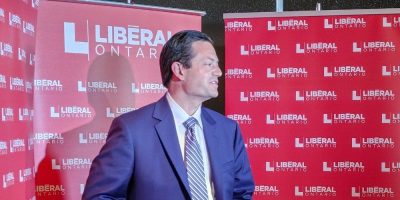 The Barrie mayor says he will be seeking the Liberal Party nomination in the riding of Barrie-Springwater-Oro-Medonte (BSOM).

“I am all in on that,” Lehman said at a news conference on Thursday afternoon. “And that means I will not be running again for mayor of Barrie.”

The BSOM riding is currently held by MPP and Attorney General Doug Downey.

Lehman has been on city council since 2006 when he represented Ward 2, and has been mayor since 2010.

Asked why he was picking up stakes now and hoping to move up the political ladder, Lehman says he feels like he has accomplished many of the things he set out to do.

“Introducing free recreational programs for low-income families was one of the best moments over the last 12 years,” he says. “Watching families get to enjoy things in our rec centres that they wouldn’t have otherwise been able to do.”

Lehman says being mayor of Barrie and chair of the Big City’s Mayor’s caucus has really shown him that a lot of the concerns people face are common in communities across the province.

“Do we want a populist government or do want a pragmatic government?” Lehman asks. “I’ve spent the last 12 years as mayor trying to get things done in a pragmatic way in the City of Barrie, and that’s the kind of politics I think we need at Queen’s Park.”

Liberal leader Steven Del Duca, who joined Lehman for Thursday’s announcement, says the mayor has a unique set of talents, experience and dedication.

“Someone who is in this for the right reasons, someone who understands how to serve with integrity, how to keep people first, how to always work relentlessly hard, and not to engage in the petty partisan politics that we don’t need anymore.”

Lehman explains why he believes Del Duca would make a good premier for Ontario.

“He is somebody who cares very, very deeply about getting things done and about serving all the people of Ontario, not a political base. And that matches my approach,” says the mayor. “I have always tried to be the mayor for all the people of Barrie.”

Lehman says there are issues he and Del Duca strongly agree on, such as education, smaller class sizes, and getting a childcare deal done.

Lehman explains why he chose to seek the nomination in BSOM rather than riding of Barrie-Innisfil.

“I’ve lived most of my life in the north riding of Barrie. I feel like the communities of Oro-Medonte and Springwater, as well as Barrie, are facing similar challenges, especially around how growth is managed and how we protect the lake (Lake Simcoe).”

If Lehman wins the nomination, and the process is still a few weeks away, he will take an unpaid leave of absence from the mayor’s chair, and deputy mayor Barry Ward will take over for the period of the election.

If dipping his toe into the provincial political pool is not successful, Lehman is clear as day that he won’t be running again in the fall municipal election.

‘I am 100 percent committed to representing this community at Queen’s Park.”