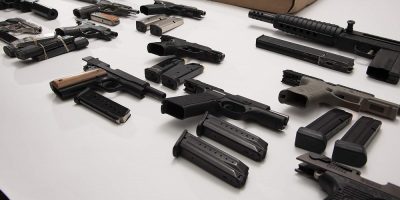 A home in the City of Barrie was subject to a search by provincial police as part of Operation Weaver, an effort to halt gun and drug trafficking in the province.

The eight-month operation, involving the OPP’s organized crime and biker enforcement units, culminated in eleven search warrants being executed on March 9, with one home in Barrie, two in London, four in Brantford, and one each in Ancaster, Paris, St. Thomas, and Oakland. While police did arrest 10 people and lay over 200 charges in connection to Operation Weaver, none of the suspects hailed from Barrie.

After executing all eleven search warrants, the OPP says a significant amount of weaponry and drugs were seized. It includes, but is not limited to, two grenade launchers and 81 grenades, 31 firearms, three explosive projectiles, nearly 11kg of cocaine, over $10,000 in illegal cannabis products, 16kg of magic mushrooms, and eight vehicles believed to be connected to criminal activity.

While police did seize a sizable haul of weaponry and illicit drugs, it is unknown how many stem from the Barrie search warrant. “I can’t get into the specifics of the evidence seized,” Detective Staff Sgt. Scott Wade, Operations Director of the OPP-led Biker Enforcement Unit, told Barrie 360. “We are still working through all the evidence seized throughout the entirety of the investigation and it would be premature for me to talk about anything seized in Barrie.”

“I can say that public safety is our number one concern and we took all precautions, in partnership with Barrie, making sure that nobody’s safety was at risk during the investigation,” he added. “We do believe the public safety risk has been eliminated.”

“Last week, the Barrie Police Tactical Support Unit was called on to execute the safe entry of a residence on Dunsmore Lane in the City of Barrie,” said Barrie Police Chief Kimberley Greenwood. “The collaborative focus on public safety is something that law enforcement encompasses in Ontario every day. We know organized crime has no boundaries and police services frequently work together to provide necessary resources to ensure community safety.”

Detective Staff Sgt. Wade says the investigation continues, and further details will be released when available.