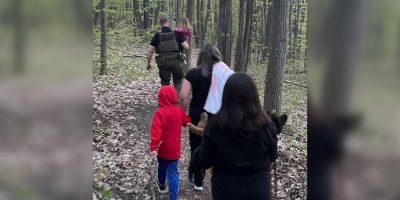 A call for help came Saturday evening from a mother and her three children who had lost their way on a walk through Ardagh Bluffs.

Barrie Police spokesperson, Peter Leon, says mom called police around 8:20 p.m., “We responded with the County of Simcoe Paramedic Service. With the assistance of our canine unit … we were able to locate them and safely get them out before dusk … just before nine o’clock. Everybody was safe and sound. It was a happy ending.”

Leon went on to say the mother did exactly what she was told to do; stay exactly where she was so officers could easily find her and her family.