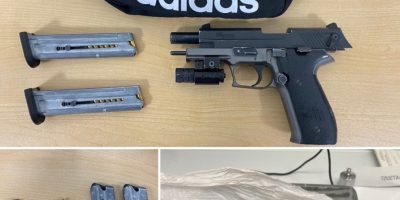 Barrie police were contacted on Saturday about a suspicious vehicle and occupants attending a Wellington Street East residence.

Officers located the vehicle and during their investigation determined the passenger was failing to comply with a court order. While attempting to arrest the 26-year-old Wasaga Beach resident, police said there was a struggle, and the man attempted to grab a pouch he was wearing around his waist. After the arrest, police said a fully loaded gun was found in the pouch and a quantity of fentanyl and cocaine in the car.

The driver, a 49-year-old Wasaga Beach man was arrested.

One suspect has been charged with firearm and drug-related charges, as well as a breach of a court order, and was remanded in custody pending a future court date. The other man was charged with drug offences and is scheduled to appear in court on March 21, 2022.