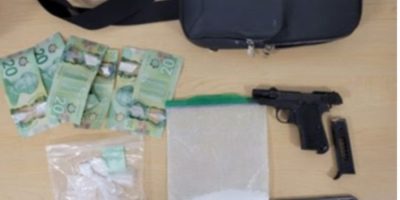 Drug and firearms charges against a 42-year-old Gravenhurst man after Barrie Police initially received calls about a suspected impaired driver in the area of Anne Street South and Tiffin Street around six on Wednesday evening.

The white pickup truck had been spotted earlier travelling southbound on Highway 400 and was reportedly swerving from lane to lane as it left the highway and began travelling in Barrie.

The truck was eventually stopped at Bayfield and Collier Streets. Police say they found cocaine, Canadian currency and a loaded gun in the vehicle.

The motorist was also booked on a charge of impaired driving.

He was held in custody for a bail hearing on Thursday.