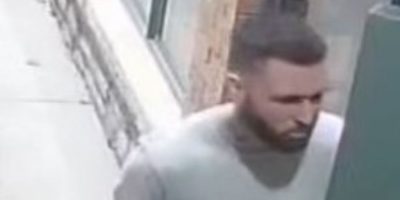 Barrie Police is searching for a suspect they say pinned a person with a vehicle and struck a police cruiser and ambulance, following an altercation outside a St. Louis Bar & Grill in Barrie.

Good morning Barrie! If you recognize this male, call #BarriePolice at 705-725-7025 ext. 2129. He is wanted for Dangerous Driving, Fail to RemainX3 and Fail to Stop for an incident last night that started in a parking lot on Big Bay Point Rd. and was driving a maroon Chev Equinox pic.twitter.com/3PqBq0R5XB

Peter Leon, spokesperson for Barrie Police, told Barrie 360 that on Tuesday, April 12, around 10 p.m., two men exited the St. Louis Bar & Grill at 350 Big Bay Point Road and were approached by the suspect, who also exited the bar, and an altercation occurred.

According to Leon, an officer spotted the suspect’s vehicle heading down Big Bay Point Road and onto Fairview Road. As police attempted to stop the vehicle, the suspect struck the front right corner of the police cruiser, and subsequently a responding ambulance before getting away.

Leon says no one was seriously injured.

Barrie Police is asking the public for help identifying the suspect. He was driving a maroon Chevy Equinox.

Leon says the man is wanted for assault with a weapon (the weapon being his vehicle), dangerous driving, three counts of failing to remain, and failure to stop for an incident.