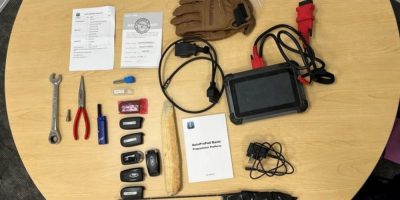 Barrie Police say they arrested three Quebec men who had programmable key fobs that could be used to operate vehicles.

Police say on Monday, just after midnight on Dunlop Street West at Cedar Pointe Drive, they conducted a traffic stop and a search of the suspects’ vehicle.

Do you think they were looking for your car to steal? Three Quebec men will appear in court today charged with drug offences, conspiring to commit an indictable offence, possess master key & break & enter tools after #BarriePolice stopped & arrested them this morning on Dunlop St pic.twitter.com/OcZ81tfgvp

Peter Leon, spokesperson for Barrie Police, told Barrie 360 that suspects could use tools to break into a vehicle, use the computer reader to program a key fob, to then operate the vehicle.

“We’ve often said locking your vehicle is the way to prevent any form of theft from happening,” said Leon. “Well, it looks like some of these opportunistic individuals are coming well equipped to try to do what they can to get your vehicle.”

Leon says the police are considering asking drivers to use steering wheel locks as an extra measure.

“From what we’ve seen, these individuals are very quick at doing what they do,” said Leon. “And sadly, we’ve seen a number of vehicles leave our city driveways overnight while people are sleeping.”

Leon says, to his knowledge, the accused are not linked to any break & enters in Barrie.

The three men are up on drug charges, possession of break & enter tools, and conspiring offences – they’re scheduled to appear in court on Monday.