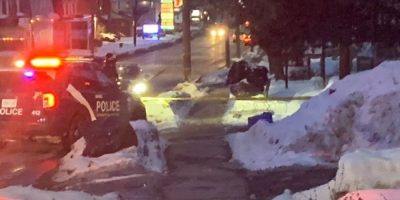 Barrie police confirm they are investigating an apparent shooting that took place around 5 p.m. on Tuesday afternoon. Two people were taken to the hospital with serious injuries.

A number of police cars were parked on Bayfield Street just south of Grove Street at a home on the west side of Bayfield. Yellow tape was strung along the driveway.

Police also have Grove Street blocked off at Duckworth Street.

A resident who lives at the home on Bayfield Street told Barrie 360 there are three units, a basement, middle and upper level. He said it was around 5 p.m. when he heard “a whole bunch of yelling” coming from the upper level for about 20 seconds and then a bunch of pops.

“I was like I hope that wasn’t gunshots, but when I looked out the kitchen window there was a guy crawling on the ground spewing blood on the snow.”

The resident said he called 911 as the man was asking for help.

The resident said the man was not a tenant.

The resident left with his girlfriend to a neighbour’s home, adding police arrived within minutes “and swarmed the place.”

Police also have Grove Street blocked off at Duckworth.

A resident told Barrie 360 she saw lots of police officers rush to the scene and saw two people taken away by paramedics.

She pointed to clothing strewn on the pavement.

Barrie police said it did not appear there was a threat to public safety.