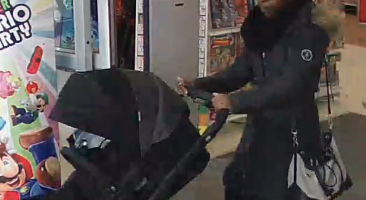 She must have really needed a stroller.

Barrie Police have released a surveillance photo of a woman wanted in the theft of a stroller from Toys ‘R Us at Park Place.

The $700 Graco EVO XT QUAD Travel System stroller was taken October 17. Surveillance video shows the suspect entering the store at 3:55 pm and leaving four minutes later, with the stroller, making no attempt to pay for it.

A day earlier, the same woman was seen leaving the north end Toys ‘R Us with a stroller. Again, no attempt was made to pay for it. In this instance, staff saw what happened and confronted the woman in the parking lot. The woman fled; the stroller was recovered.