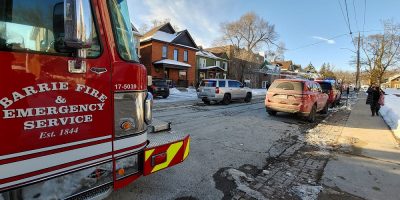 Barrie police investigating a suspicious downtown fire are hoping to location surveillance video of two people walking along Mary Street on Friday between 1:15 and 1:45 p.m. Police say they were wearing dark jackets.

One person suffered non-life threatening injuries in the fire.

A woman was spotted leaning out the window of a 3rd-floor apartment at 68 Mary Street around 1:30 Friday afternoon by Barrie Police officers who tried to render assistance. The officers had to turn back due to the thick smoke, and Barrie Fire was called in.

Fire crews used their ladder to help the woman escape, who was then rushed to hospital for treatment. Authorities report the entire building was evacuated as a precaution, with residents housed in Barrie Transit buses temporarily.

As of mid-afternoon Friday, the structure was being ventilated so that officials could gain entry, investigate the cause, and assess damage.