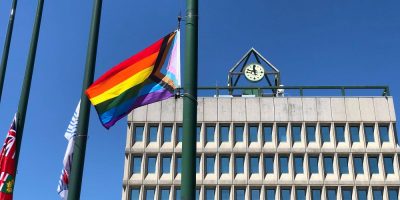 Barrie Pride raised the progressive pride flag at City Hall to mark the start of Pride Month across the land, then immediately lowered it to half-mast out of respect to the remains of 215 children found at a former residential school site.

Pride Month happens every year in June and is traditionally marked with a flag-raising, pride parade and a host of other events. While the flag-raising did go ahead this year, the timing of the event was not made public to discourage a crowd gathering.

Few other in-person local events are expected for this year’s Pride Month, due to the uncertainty presented by current COVID-19 restrictions. In an email to Barrie 360, Barrie Pride Chief Operating Officer Jessie Lawson promised some weekly events, starting with a driveway decorating contest running until June 5. “Each Tuesday in June we will announce a new contest, flag raising, showcase our Pride Positive Partners, and host Covid-safe Pop-Up events throughout the summer months,” she said via email.