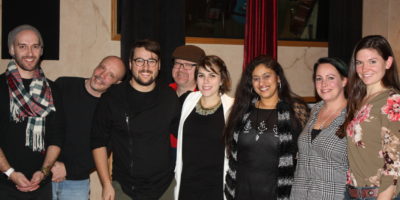 Calling all songwriters. The Barrie Regional Songwriters Group, a chapter of the Songwriters Association of Canada, returns for the fourth year with a new format and new opportunities to hone skills in a non-judgmental setting.

“We’re trying to change it up and meet a few times a year instead of every month,” said Sarah Melody who is asking members to make a commitment to themselves and their craft and help cover the costs of bringing in music industry professionals. “When you invest in your craft, the more you develop your song writing ability and the seriousness of your craft also comes into play because you’re investing in yourself. When something is free you don’t always value it.”

The group has set a membership fee at $51 for the season pre-paid or $15 for a drop-in meeting. Five meetings are slated to take place over the next year. They are changing to Sunday afternoons from 1-3 p.m. to help accommodate musicians who are performing Saturday night.

Confirmed speakers include Paul Fairley, Admirable Entertainment, who is expected to give some tips about working with promoters at the November meeting. In January 2020, Brian Allen, producer, Board of Directors for Country Music Association of Ontario, co-writer What About Love by Heart, is hosting a ‘Date With a Demo”.

“It’s one of those forums where individuals songwriters can get feedback from industry professionals and check whether they want a critique on the performance or writing or production of the song,” said Melody who has found it helpful with her own music. “It can (range from) feedback on the melody and lyric, or direction for a fully produced song as well as writer-ship, or a song that’s been on the radio.”

Since BRWG began in 2015, it has attracted songwriters from Barrie to Angus, Bradford and as far north as Huntsville. It’s a place where beginners can start learning the craft of songwriting and it’s also a place where those who have been involved with music for a while can continue to hone and develop their skills through feedback whether the song is raw and in the early stages or fully produced. The meetings can help spark ideas, provide different perspectives which can, in turn, open it up to reach different audiences, including radio.

Melody, who is coordinating the group with songwriter Chris Burton, will be speaking on self-management at the first meeting, Sept. 15. It is a volunteer effort by both.

Melody has a long history with the music industry which includes two EPs, one full length album, and four singles. She studied at the Harris Institute of the Arts in Toronto to learn about the business side of the music industry and followed it up with a scholarship to pursue a BA in commercial music at the University of the West of Scotland.

While she has been absent from the performing scene recently, music has continued to be a part of her life. She currently serves on the board of directors for Ontario Musicians Co-operative Inc. and she’s been back in the studio co-writing songs that will take her music in a new direction. She also recently joined a soul/rock band as a singer. If you’re interested in registering, click here for more details