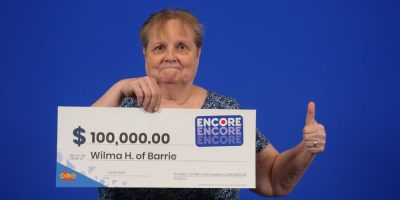 Saying “yes” to Encore paid off for Wilma Hadley of Barrie.

She matched the last six of seven Encore numbers in exact order in the March 25 Lotto Max draw to win $100,000!

Wilma, a grandmother of eight, says her daughter checked her ticket for her using the OLG App when she discovered her big win.

“It’s wonderful not having to worry about the future,” she shared while at the OLG Prize Centre in Toronto to pick up her winnings.

Encore offers 22 ways to win and can be played in conjunction with most lottery games for an extra $1. There is an Encore draw every day.

The winning ticket was purchased at Giant Tiger on Cundles Road in Barrie.