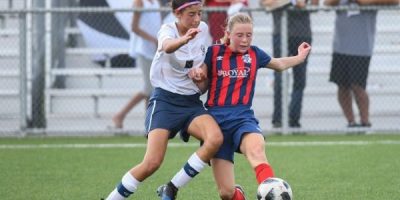 Even with Ontario heading into another lockdown, Mark Cristante believes it’s time we let the kids play.

The Barrie Soccer Club (BSC) technical director believes the physical and mental health challenges the COVID-19 pandemic has presented by keeping kids away from the things they love to do has taken a heavy toll on them.

Cristante says every week he hears from kids wanting to quit because of the restrictions.

“The kids are scared, they’re sad, they’re frustrated, they’re angry,” he said. “They just want it to be over with. It’s a lot of stress. The No. 1 thing is we’re in a pandemic and its pretty stressful for kids and it creates anxiety. Then you start locking kids down, it creates more anxiety. You’re taking away sports, which is an outlet, so it’s a double whammy.

“That’s the part I think has been missed by the government. I think now they’re understanding that, but that’s a real challenge.”

While we may be amidst a pandemic, the Barrie Soccer Club staff member believes there’s also an underlining pandemic of how we are going to deal with all these kids and people that are going through mental issues and even depression.

“This concerns me,” Cristante said. “I’ve been dealing with it myself. It’s been difficult. There’s been positives. I’ve been running, walking, but what about our seniors? We can’t visit people, it’s difficult on everybody.”

Cristante was encouraged to see Ontario Soccer recently send a letter to Dr. David Williams, Chief Medical Officer of Ontario, expressing the importance of getting its athletes back on the field competing and the lengths they have gone in developing a “sophisticated” Return to Play Guide in collaboration with the National Governing Body, the Ministry of Heritage, Sport, Tourism and Culture Industries and Public Health officials.

To create and impose, what they say, are strict protocols to address the vital safety and hygiene aspects for all participants and equipment both on and off the field of play, keeping transmission rates at an “absolute minimum” in the process.

“I’m glad that they did that, it shows good leadership,” Cristante said. “Everybody’s concerned about the mental health, the physical health for the athletes.

“It is frustrating. This is a big year for the 16 and 17-year-olds. This is the year they got to talk to university coaches because they’re showcasing themselves for scholarships. It’s difficult because there’s no competition.”

The BSC is the only club in Simcoe Region currently running a soccer program and the technical director says they have gone to great lengths to ensure the safety of the kids.

Last year, Cristante points out, only the BSC and one other club ran a recreational program for kids just to keep them active.

“I don’t know about other sports, but we’re following the protocols,” said Cristante, who said the club did winter Zoom sessions with physical and technical training to keep kids active and were training at different venues throughout the city in groups of 10 while in the Red Zone. “

“Everybody does a (COVID contact) trace log,” he continued. “The kids are asked before every session, ‘How do you feel? Do you have any symptoms? If you do, stay home.’ We’re abiding by the sanitization, the social distancing. We’re following the protocols to a letter.

“That’s where it’s very frustrating for organizations that are trying to run like a club and they can’t because of this, but they’re following all the rules. The transmission hasn’t been shown to happen in the big outdoor fields. It’s a challenge for everybody.”

The truth, Cristante says, is that people are getting out there and doing unorganized soccer. He has seen adults getting together.

“Depending what the government does, that could be a downside. More people are going to start getting together unorganized and doing their own thing, and that’s not good.”

The BSC house league season normally starts at the end of May. If the area is in the Red Zone, they will be training. If it did move into the orange zone, they could play games.

With vaccination provinces across the province starting to ramp up, there’s hope for a brighter outlook this summer than last. Still, unless things turn around it could make for two summers without tournaments and a regular schedule.

“I’m hoping. I’m optimistic, but when I see the cases like today, it deflates me,” Cristante said. “If we look at the data, and all the decisions are made on data from what I’m being told, that data would lean towards a lockdown. Which I don’t think is a good solution because lockdowns haven’t shown to really solve the problem.

“I don’t think this is going away. I hope it all goes away and everybody gets vaccinated and there’s no cases, but I don’t know if that’s realistic. We’re living in this situation now. Are we all going to stop living?”

The BSC technical director also points to how instead of kids getting out and doing exercise and keeping physically active, they are staying home now playing video games.

“We have an obesity epidemic and we have kids now playing video games because video games are addictive, but they’re not getting physical health, physical activity,” he said. “Which means it’s stressful for parents – I’m a parent too – because we’re trying to get our kids out.”

While last year, at the beginning of the pandemic, they had to combine age groups, the BSC is already about where they were last year with registration numbers.

“This year people are like, ‘I want my kid active. I want them out of the house,'” said Cristante, who explained the club will be running a recreational program again. “So, it’s really good that we’re doing that.”

People can register on the BSC website at barriefc.ca. Age groups run from U-3 to U-19, plus they have an adult co-ed league and adult men’s league.

“We’re doing the best we can,” Cristante said.