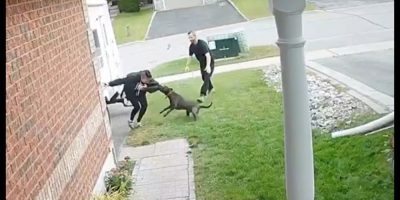 A Barrie woman who says she was mauled by an off-leash dog in front of her Cunningham Drive home wants the owner to deal with the aftermath.

40-year-old Cory Fram, a mother of two, tells Barrie 360 the dog was running down the road Thursday afternoon and went past her.

“I heard the man and footsteps like somebody’s running down the sidewalk going 100 miles an hour,” Fram says. “So, I turned around and called ‘puppy’ and slapped my thigh to get the dog to stop.”

As the owner was crossing the street, Fram says the dog latched onto her arm.

“I was trying to shake my arm and get it off,” she explains. “When the dog dropped off my arm I was coming towards the house, and it bit my hand and went around through the top of my hand in the palm.”

Her voice shaking and emotional, Fram says as she got close to the house the dog grabbed her rear “and bit a chunk out of it.”

The man grabbed the dog’s collar.

“He pulled on the dog, and the dog had my finger in his mouth, and it shredded by finger.”

A video of the attack was captured by a doorbell camera.

Fram was transported to hospital for treatment of injuries and sent home.

She and her husband, Kyle, aren’t sure if the man who retrieved the dog is actually the owner.

But Kyle tells Barrie 360 that based on social media posts and comments from neighbours, it would appear the person who took the dog owns it.

He has gone door-to-door looking for the man.

“I have had several neighbours when I showed video pictures tell me that they have seen the dog off-leash several times.”

Whoever the owner is, the person does not live on Cunningham Drive.

Fram says she can’t imagine if one of her children had been confronted by the dog.

“This dog is all muscle and could have very easily taken one of my kids.”

The incident was reported to bylaw authorities and police.

Bylaw officials told Barrie 360 they had received a report and were trying to identify the owner of the dog.