The City of Barrie says goodbye to its first mayor this afternoon.

The funeral service for Willard Kinzie is at 1 pm at First Baptist Church on Grove Street East.

Among his proudest achievements was the development of Barrie’s Waterfront Trail.

He was full of life and ideas. Ideas like Barrie’s waterfront. In fact, Mayor Jeff Lehman calls Willard Kinzie, the first Mayor of Barrie, “the father of our waterfront.” Lehman released a statement after learning about the passing of Kinzie, saying “Barrie has lost one of its truly great leaders, and one of its greatest champions.”

Lehman wrote: “He saw the possibility to create a park and beach, a place for all the people of Barrie. This legacy not only delights us, it defines us. That the first thing about Barrie that most of us mention is our waterfront is due to Willard’s vision. In more recent years, he brought the concept of a waterfront heritage trail to the City, now enjoyed by residents and visitors as they walk around Kempenfelt Bay.”

This picture has sat beside the case containing the Chain of Office for years. His is the first name on the chain. I will miss you so much, my friend. 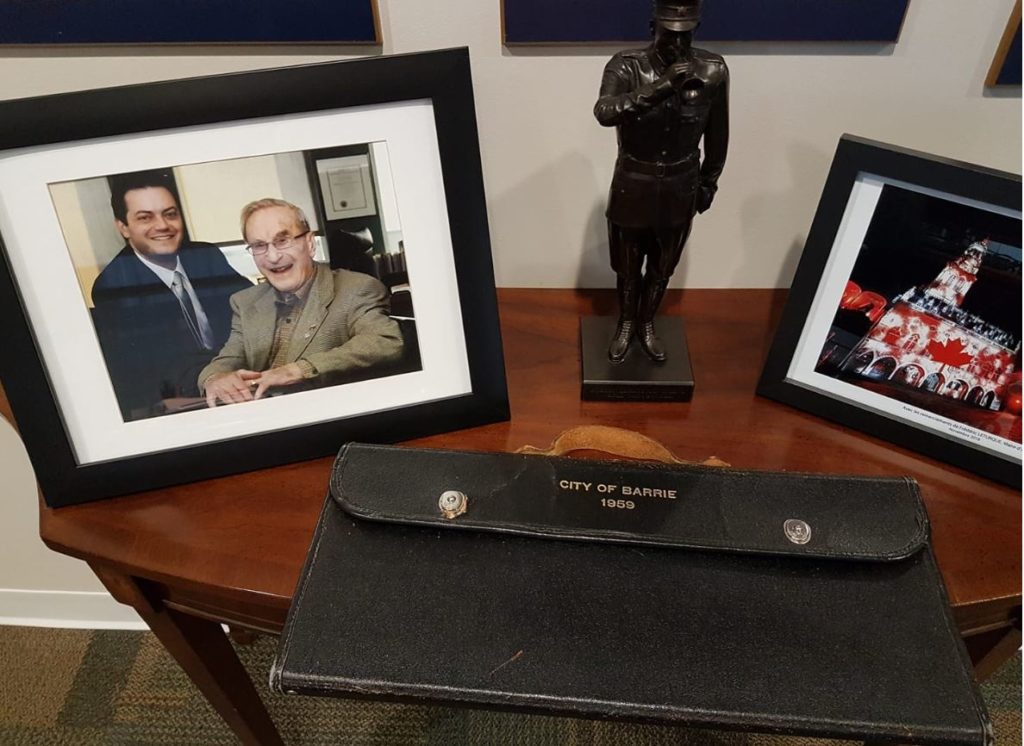 Lehman’s favourite story of Willard is of him arriving at the head office of Canadian corporations in Toronto, handing his business card to the receptionist, asking to see the President. When he was granted the inevitable meeting that a Mayor’s card earned, he would ask “why aren’t you in Barrie?” – putting our small Central Ontario town on the map with our country’s leading companies.

“Be bold” were words Willard lived by.

“Willard was a mentor to me. He taught me so much. Visiting him one day at his house on Shanty Bay Road, he once told me “there will always be those who don’t want things to change. Don’t let them stop you.” Those are words I will never forget. His is a legacy of integrity and energy in public service that all of us in public life would do well to aspire to.

As long as we believe in the future of Barrie, and as long as we never rest in our work to improve it, we will be honoring Willard’s legacy. But he will be deeply missed. I’ve lost a friend, as have so many in Barrie who were privileged to call him a friend as well. Barrie has lost one of its truly greatest leaders and one of its finest gentlemen.”

Willard Lewis Kinzie, born in Blair, Ontario on September 26th 1919, passed away peacefully after a short illness on November 25, 2018 at Hospice Simcoe in Barrie. It was his 100th year of a rich and full life. He was surrounded by loved ones during his final days.

Twice lucky in love, he married first wife Ruth Snider in 1942. They had 67 happy years until her passing in 2011. In 2016 he married Karen Hunter, a long-time family friend, who provided love, comfort and companionship in his final years.

Willard’s life was full and abundant, filled with many adventures and too many accomplishments to list! A favored family memory was the fact that numerous times a year they would all receive thick manila envelopes filled with clippings of his latest exploits – at least the ones which made the paper!

Willard kept true to his Mennonite upbringing by living to a high standard of integrity and values throughout his life. He was a regular attendant at Emmanuel Baptist Church and in later years, First Baptist Church.

He served with the Canadian Firefighters and was stationed in Portsmouth during the Battle of Britain. (In England during WWII he won the 1-mile race at an all forces track meet.)
After his service in the war, he purchased a small dairy in Guelph. In 1947 he moved to Barrie and purchased Lakeview Dairy. Over the next 25 years, he acquired an additional 52 dairies – making Lakeview one of the largest independently owned dairies in Canada. In addition to the dairy he also ran a large restaurant and was one of KFC’s earliest Canadian franchisees. (He became good friends with Colonel Saunders).

In 1952, Willard was elected as an alderman and in 1957 he became Mayor of the Town of Barrie. As a result of his relentless drive, Barrie became a city in 1959 and he was honored to serve as the city’s first mayor – an accomplishment he remained proud of for the rest of his life.

After retiring from politics and the dairy business, he applied his business acumen to founding Willard’s Adventure Club in 1980. This allowed him to focus on his love for physical outdoor pursuits, hiking and backpacking specifically. Over the next 30+ years he led hundreds of hikes around the world, including hardcore backpacking trips from the Rocky Mountains, Nepal, the Yukon, Peru, the Grand Canyon and New Zealand. While out on the trail, Willard was known as ‘Titanium Man.’ Highlights of his pursuits included: summiting Mount Kilimanjaro (on his 79th birthday no less!), climbing Mt Washington over 50 times and completing the 2200-mile Application Trail in his 88th year.

Always an active and enthusiastic athlete, he cross country skied, hiked, played baseball – but was always frustrated at golf!

The Barrie Y became an important fixture for Willard as he worked out regularly and continually throughout his later life. Curling was an especially significant part of his last 25 years, he advanced quickly to “skip.” In 2004, he led his team to an “8-ender,” one of only three in the history of the Barrie Curling club. He was chosen to throw the opening rock at the Ontario Men’s Curling Championship in 2012 – it landed right on the button!

One of his proudest achievements was the development of Barrie’s Waterfront Trail. Starting in his late 80s, he worked with his usual energy and enthusiasm to spearhead the design, funding and approvals necessary to create a 6 km trail around the lakeshore. A bronze replica of his hand is posted at the trail’s end to give a “high five” to those who finish the path.

Never one to let minor illness or injury keep him from his activities, he led a hike in New Zealand – a mere month after having a hip replacement. His last workout at the Y was just two days before his final visit to the hospital.

He displayed a positive attitude and an amazing sense of humor, he liked people and people liked him. In his later years he always was thankful for each additional day, and enjoyed the steady flow of friends and family that would visit. Everyone who knew him will forever miss his long (sometimes VERY long) stories, his sense of humor and the joy he brought to everyone around him.
Willard’s family wishes to thank the caring and supportive staff at Unit 3NB at RVH and Hospice Simcoe.

Friends will be received at ADAMS FUNERAL HOME, 455 St Vincent St, Barrie on Sunday from 3 – 8PM. A Funeral Service will be held at First Baptist Church, 550 Grove Street East Barrie at 1 o’clock on Monday, December 3, 2018 with visitation from 12 PM. In lieu of flowers, donations to the Royal Victoria Hospital Foundation, Barrie Community Foundation Waterfront Heritage Trail, Hospice Simcoe or the Mennonite Central Committee would be appreciated by the family. Messages of condolence may be forwarded to the family through adamsfuneralhome.ca