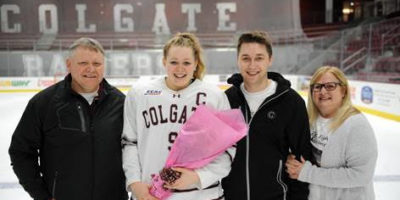 Jessie Eldridge took up the game of hockey as a youngster and played with the boys in Barrie, as there was no league for girls.

Eldridge had dreams like any young Canadian hockey player to make it to the big time.

On Monday, the dream will come alive when the 22 year old forward puts on the jersey for Team Canada as the Canadian women’s national team goes up against Team USA in the 2019-20 Rivalry Series.

A former Barrie Shark, Eldridge also found her hockey legs playing in Toronto, starting in Grade 10, and was the captain of the women’s team at Colgate University in 2018/19, leading the club in scoring and was named Colgate Athletics Athlete of the Year.

Eldridge grew up watching the Canadian women’s team and says she is honoured to be in the position of playing for the club, and hopes young Barrie Sharks will have someone to look up to.

She was invited to her first Team Canada camp in May and from there it has been step by step.

“It has not fully set in yet. I am not sure it will until I get to the rink Monday and you see your name on that jersey. It’s something I have always grown up dreaming of doing, but until it becomes a reality. I am really looking forward to it.”

Eldridge was not with the club when Team Canada lost the first two games of the series to the Americans in December, by scores of 4-1 and 2-1.

She will be in the line-up for game 3 of the five-game series on Monday in Victoria and Wednesday, February 5 in Vancouver.

The final game of the series will be played Saturday, February 8 in Anaheim, California.

One thing Eldridge is not going to do is overwhelm herself.

“Everyone feels a little pressure to perform for your country, for yourself and for your team. I am just really excited. I kind of have nothing to lose. This opportunity doesn’t come every day. I am just trying to enjoy every second and moment I get to spend there.”

Eldridge feels good about the future of women’s hockey.

“As much as you like to see Canada win every year, it’s really promising to see those other countries kind of making those next steps.”

At the World Women’s Hockey Championship in 2019, Team Canada had to settle for bronze. The Americans won the gold medal game over Finland.

“The Canada-U.S. rivalry will always be right at the top, but there are other countries that are moving up quick.”

The 2020 World Women’s Hockey Championship(WWHC) is in Nova Scotia in April. Eldridge has no promises that she will be part of the club.

“I am going to focus on the next 10 days with the team. This opportunity doesn’t come every day and I am not guaranteed to do anything else with them. I will take it as it is, enjoy it and have a lot of fun.

Of course, to represent Canada at the WWHC is something she would absolutely love and believes the three games against the Americans will be a test.

“Sure, it’s part of the evaluation process. Every time you are on the ice you are being evaluated. We’ll see what happens. I am going out and just have a lot of fun, and take it day by day.”

Eldridge has a big team of supporters back in Barrie that will be cheering her on, including her parents Duane and Lisa, and brother Kyle.