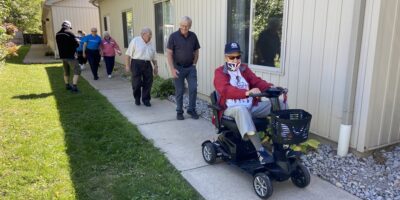 There are a million reasons to celebrate Will Dwyer.

The Barrie resident who raised more than $1.2 million for the Terry Fox Foundation over 41 years will have a park renamed in his honour.

Coun. Gary Harvey’s motion was approved at city council on Monday that would see Centennial Park South on Lakeshore Drive renamed in memory of Dwyer who died in May at age 96.

The waterfront park offers skating in the winter and twin basketball courts in the summer.

Staff will work with Dwyer’s family and the Terry Fox Foundation to determine an unveiling date that would coincide with other events being planned to honour Dwyer.

Banner image: Will Dwyer riding his scooter at an event on Sept./20