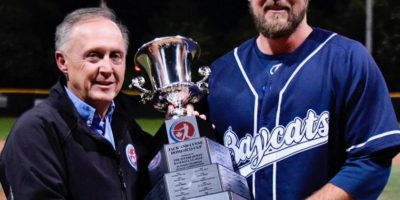 A lead-off home-run by Ryan Spataro was all the Barrie Baycats would need to earn their 6th straight Intercounty Baseball League Championship.

But they would not stop there.

The Baycats pounded out 16 hits in a 15-0 rout of the Kitchener Panthers in Game Six Saturday night to win the series 4-2.

Spataro went 4-for-6 at the plate driving in four runs. He was chosen playoff MVP, scoring 19 runs and adding 15 RBI.

Congrats to all of the Baycats Players, Volunteers and Fans! #6peat 🏆⚾️

Adrian Salcedo struck out five batters and allowed just three hits in eight innings of work. Brad Bissell came on in relief in the ninth allowing one hit.

With the victory, the Baycats have tied the record for most consecutive championships. The Brantford Red Sox went on the same kind of tear from 2008 to 2013.