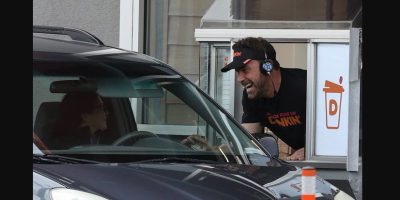 Ben Affleck surprised fans by working the drive-thru of a Dunkin Donuts in Massachusetts.

The 50-year-old served up treats and java for free to customers, ensuring they were good and caffeinated.

It’s safe to say that the 50-year-old actor and director “Runs on Dunkin,” as the slogan goes.

He loves the American coffee chain so much that he’s teamed up with them, reportedly signing a multi-million-dollar deal with the company.

Part of the deal includes donating to his non-profit agency, the Eastern Congo Initiative.

Specific details on the partnership aren’t known, but sources say having Ben work at the drive-thru for the day was his idea “for a hidden camera type commercial.”

His wife, Jennifer Lopez, joined him at the restaurant, explaining how her husband loves the brand.

He is often photographed with a coffee in his hand, so he knows what he’s talking about.