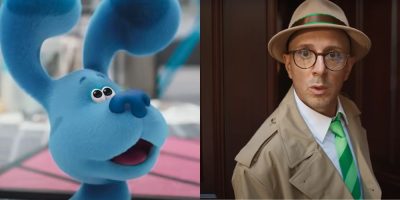 Grab your handy dandy notebook because Blue and Josh are New York City in the first Blue Clue’s Movie!

The trailer “Blue’s Big City Adventure” has been released and shows Blue and Josh Dele Cruz trying to navigate NYC, and eventually getting lost.

Old school fans of the show remember in 2002, Steve took off to college and left blue with his brother Joe.

At one point in the film, all hosts, including Steve, Joe, and Josh Dela Cruz unite.

Last year, Burns made a surprise Twitter video addressing his fans; it was the sweetest thing.

“And some of it has been kind of hard, and I wanted to tell you I couldn’t have done that without your help.”

Watch his message below.

So about that time Steve went off to college… #BluesClues25 pic.twitter.com/O8NOM2eRjy