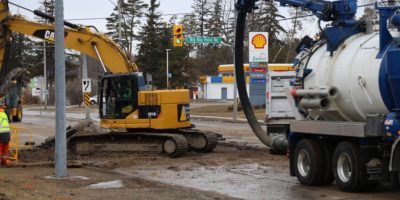 The Boil Water Advisory has been lifted for south Barrie residents and businesses.

The City of Barrie says Health Unit tests of the water show it is once again safe to drink.

@SMDhealthunit has lifted the Boil Water Advisory for the Yonge St. and Big Bay Point Rd. area in #Barrie. Laboratory test results have confirmed that the water is free from contamination and is now safe to drink https://t.co/RpsKsqPLdc.

The advisory was put into place mid-afternoon Friday, after an overnight water main break at the intersection of Yonge St. and Big Bay Point Rd. in south Barrie.

The City of Barrie is advising some residents in the south end to boil their water before use, after a water main break exposed the drinking supply to open air. It is expected the Boil Water Advisory will remain in place for the entire weekend.

Those affected are highlighted in yellow on the map below.

City of Barrie works crews shut down the intersection before the morning rush hour, and began excavating to gain access to the broken main. A City representative indicates the intersection should expect to be closed until 5:00 Saturday afternoon.

A Simcoe Muskoka District Health Unit spokesperson says the water has to be tested several times before the boil water advisory can be lifted. For more information on what to do during a boil water advisory, visit the SMDHU website.

All homes and businesses affected by this morning’s water outage are asked to check in and around their water meter for leaks, as pressure spikes may have occurred which can cause leaks. If you find a leak call Water Operations at 705-792-7920.

Barrie Transit has detours in place on Route 4 and 8. Stops in the area of Yonge and Big Bay Point are temporarily closed and signed as “out of service”.