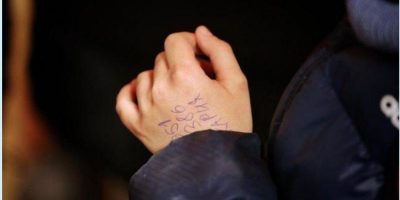 An 11-year-old Ukrainian boy has been hailed as a hero after fleeing his war-torn country by himself — with only a plastic bag, a passport and a telephone number written on his hand. The boy, Hassan, travelled roughly 620 miles (997.79 km) by train from Zaporizhzhia, the site of Europe’s largest nuclear power plant, to Slovakia to meet relatives, according to Slovak officials.

The power plant was taken over by Russian forces last week after a battle during which shelling led to a fire at a training facility. Although none of the reactors was damaged, Ukrainian President Volodymyr Zelensky warned the attack could have caused destruction on a scale far bigger than the 1986 Chernobyl disaster.

In a video posted to Facebook, the boy’s mother said she is a widow and explained that she was unable to leave Zaporizhzhia because she had to stay with her sick mother, who cannot move on her own.

“I am very grateful that they saved the life of my child,” Yulia Pisetskaya said Sunday. “In your small country, there are people with big hearts … Please save our Ukrainian children and give them a safe haven,” she added.

Once Hassan safely crossed over the border, volunteers and Slovak authorities “kept him warm and provided him with food and water, which they packed for his next trip,” Slovakia’s interior minister, Roman Mikulec, said on Facebook. Authorities used the telephone number written on the boy’s hand to contact his relatives, and they were reunited.

Pisetskaya thanked Slovak authorities for helping her son, as well as customs officers at the border who “took him by the hand and helped him cross the border in Slovakia.”

“Little Hassan is only 11 years old, but in his way, he has shown huge determination, courage and fearlessness that sometimes adults don’t have,” Mikulec wrote on Facebook after meeting the boy on Monday. “I am really very sorry for him and all the other children and their families who have to flee their country because of what is happening in Ukraine.”

More than 2 million people have fled Ukraine since the start of Russia’s invasion of the country, according to the United Nations. Hundreds of thousands are children.

“He won everybody’s heart with his smile, fearlessness and determination worthy of a real hero,” the Slovakian Interior Ministry said on Facebook.

The boy was sent off alone on a train by his desperate mom to be reunited with relatives.