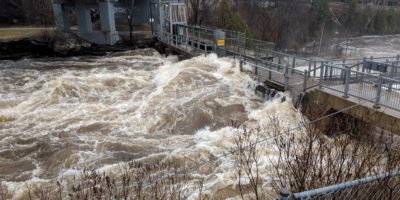 After over twenty days, Bracebridge has ended its State of Emergency.

I have signed and submitted papers ENDING THE FLOOD EMERGENCY IN #Bracebridge. Nav restrictions still in place. Details to follow. Facebook Live session on Town of Bracebridge Facebook page at 1PM.

Bracebridge Mayor Graydon Smith announced today that he has signed and submitted all the paperwork required to bring to close a State of Emergency first declared on April 23rd. And in that time, Mayor Smith said he saw a town come together. “The amount of goodwill that’s been shown in this community for each other has been unbelievably touching, and unbelievably effective, frankly, in helping a lot of people with their safety and their personal property.” said Smith. “And if you still have some time to commit to that, I’m sure it could be put to good use. So check on your friend, your family, your neighbour.”

Smith notes that while the emergency has ended, a Ministry of Transportation ban on marine vehicles in some areas remains in effect. “That decision to rescind that order is not ours to make.” said Smith. “What is paramount in the order is everyone’s safety.” The ban remains in place on Lake Muskoka, the north and south branches of the Muskoka River, and Moon River.

Historically high water levels brought about the declaration, levels that would continue causing extensive water damage for over a week. Similar declarations were made in Huntsville, Muskoka Lakes, and Minden.

Many volunteers turned out for a post flood community clean up over the weekend, along with sand bag removal across town.