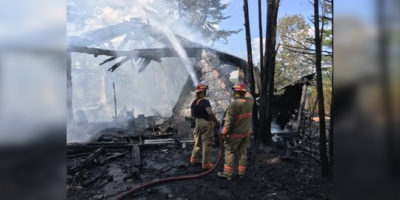 The OPP are hoping for witnesses after a fire destroyed an abandoned lodge in Bracebridge.

Emergency crews were called to the Bangor Lodge on Bowyers Beach Road around 2:30 Thursday afternoon, with reports of a blaze there. Crews spent all night fighting the fire, and spent much of the day Thursday on scene, dousing hot spots.

The province’s Fire Marshal has been called in to investigate and help determine a damage estimate, while the OPP are asking anyone with information on the fire to contact the Bracebridge detachment.

Wednesday’s fire was one of three the Bracebridge Fire Service was called upon to fight that day.