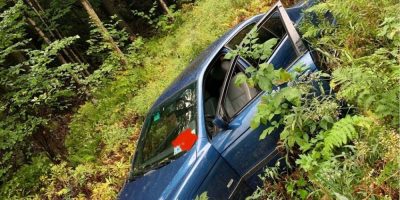 Monday was a busy day for Bracebridge OPP as three motorists were charged with impaired driving.

Just before 10 a.m., police were alerted by a member of the public that a vehicle had left Doherty Road in Muskoka Lakes Township and crashed into a deep ditch. The driver was not injured, but officers began an impaired driving investigation. As a result, a 21-year-old Bracebridge man was charged with the following offences:

Then around 1:20 p.m., OPP responded to a single-vehicle crash on northbound Highway 11 near Hastings Drive. A vehicle slammed into a hydro pole and ended up in the ditch. The motorist, a 58-year-old Muskoka Lakes Township woman escaped uninjured, and was charged with impaired driving.

The third drunk driving investigation happened around 6:30 p.m. when a pickup truck crashed into a ditch on Waters Road in Gravenhurst. The 67-year-old driver from Gravenhurst was not injured. He was charged with impaired driving and driving while under suspension.

Police say members of the public are important partners and are credited with taking many impaired drivers off the roads. If you suspect someone is driving while impaired, please call 9-1-1 from your hands-free device if it is safe to do so.