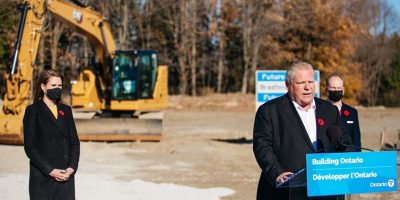 Groups fighting the Ford government’s plan to build the Bradford Bypass see a road to hell that will not be paved with good intentions.

Opponents took their fight against that project and the proposed Highway 413 to the doorstep of York-Simcoe MPP Caroline Mulroney on Saturday afternoon with a demonstration at her Holland Landing constituency office.

Premier Doug Ford doubled down this week on the government’s support for both projects.

On Monday, Ford announced the province would pay the cost, which is still unknown, for the 16-kilometre, four-lane Bradford Bypass that is to connect Highway 400 with Highway 404. The premier justified the need for the bypass, as he noted the area will experience rapid growth over the next 10 to 20 years, and investing in this new route will help ease congestion.

Two days later, the premier was in Caledon at the site of the proposed Highway 413, a route he said is necessary to relieve traffic congestion in the regions of Peel, Halton, and York.

Margaret Prophet of the Simcoe County GreenBelt Coalition said the cost of the new roads is anywhere from $10 to $12-billion between the two. She said they would like to see the money reinvested in ways that support the community and deal with traffic issues in a more sustainable way.

The Bradford Bypass has been on the books for decades at Queen’s Park. Opponents argue their objections aren’t pie-in-the-sky but have been lifted from previous studies done by the Ministry of Transportation(MTO).

“This isn’t stuff we have had to research,” said Prophet. “This is their own studies(MTO). We know there’s going to be impact on the climate, impact on Lake Simcoe, and the 400 traffic and the 404 traffic is going to be worse with the bypass than without it.”

She said most of those commuters are trying to get to the 400 and 404, so if you are trying to reduce the commute only to get to more congested 400-series highways, Prophet argues that doesn’t seem to be a net benefit to anybody. She said those findings are also contained in MTO studies.

The last environmental assessments on the projects were completed in the 1990s.

Prophet said they hear a lot of nice words from the government, but she added there is nothing in the legislation that holds the government to anything other than an administrative update showing that these studies were completed in 1997.

“When you are putting that much money, and it is that destructive for Lake Simcoe and the Holland Marsh wetlands, we think you need to have transparency and full information with the community. That’s not what we feel we’re getting.”

“As that growth came, starting in the 1980s, investment in an east-west artery between Highway 400 and Highway 404 did not. That didn’t stop traffic. It just meant traffic choked up our downtown, clogged our local roads, resulting in speeding in residential neighbourhoods, exhaust fumes next to downtown restaurants, and commuters stuck in traffic on local roads and rural roads,” he said.

Rescue Lake Simcoe Coalition and the Simcoe County Greenbelt Coalition both claim the bypass will only go to line developers’ pockets.

Prophet said the highway was first thought of in the 1970s and the environmental assessment started in the 90s.

“The context is much different. We have climate issues, biodiversity issues, and we have Lake Simcoe that could be toxic in 60-years because of road salt pollution. So, now we’re going to ignore it and just continue with the project because it had a long history? That doesn’t seem to make any sense.”