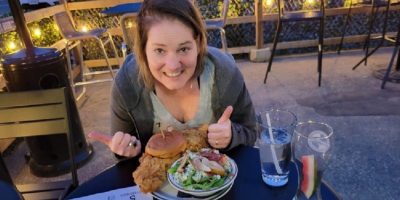 For 11 years, the Barrie woman has been dealing with the physical effects of a rare brain tumour that affected her ability to move and even led to a stroke.

Hoping to raise awareness for International Brain Tumour Awareness Week, she’s sharing her story, hoping to inspire others and give them support and information.

In 2011 when she was just 28 years old, she had emergency surgery to remove a tumour.

“There are over 100 different types of brain tumours,” she explains, “the kind that I had, ‘Hemangioblastoma’ was so rare; it makes up only 2% of them.”

During the surgery, she suffered a stroke, resulting in the left side of her body feeling numb and cold.

The tumour affected mobility issues on her right-side including coordination issues.

She also lost feeling in her right arm and hand and the ability to walk.

“Thankfully, I could still give the middle finger,” she jokes.

“An MRI on my spine showed that a piece of the tumour was already down on my tailbone and was slowly growing,” Mackenzie says.

“A biopsy revealed it was the same type in my brain. The theory is that a piece broke off and went down my tailbone. There are only seven documented cases of this happening.” She explains. “I eventually had to go through full brain and spinal radiation.”

After her surgery, Melissa had to learn how to walk again, and was forced to give up the things she loved, like playing the guitar, and her career as a long-term care worker. Keeping her balance is still something she struggles with.

Through the years, though, she’s found her purpose is to advocate for others.

She got involved in public speaking and has appeared at several charitable events. She created and coordinated ‘Hats For Hope”, which gave out newly made hats to fellow BT (Brain Tumour) lovelies at the Brain Tumour Foundation of Canada.

She’s now putting the finishing touches on her website, “Inspiring to Aspire”

“My website’s purpose is to collect tips and share them to help other BT lovelies,” she says.

It will approach topics with education and humour while focusing on intellectual, spiritual, physical, emotional, and social needs.

“Every day, there are some challenges, frustrations, anger, and all that,” Mackenzie says. “And depending on what kinds of events or opportunities I take; it makes life absolutely amazing and exciting.”

“It brings me so much joy to help other people because that helps me cope with my good and bad days.”