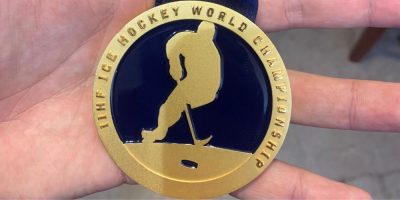 Just days removed from winning Gold for Canada at the World Junior Hockey Championship, Brandt Clarke has returned to the Barrie Colts with fire in his gut and a Memorial Cup on his mind.

“That’s what all our goals are,” he told Barrie 360. “That’s where every day we get to the rink, that’s what our mentality is. We need to take a step in the right direction to make that a reality.”

Clarke says there are still things the team needs to work on, and he wants to contribute as much as he can to make the dream a reality.

And he has much to offer. From his few months skating and playing with the Los Angeles Kings of the NHL, to the whirlwind of the junior championship where, among other things, he says he and his junior teammates learned how to overcome adversity after losing the first game of the world championship to Czechia.

“We had a really strong group, a resilient group, in that dressing room. It was definitely a tough showing Boxing Day, but we wanted to use that as a learning lesson, and from that point forward we just always took steps in the right direction. If we didn’t learn from that game, I don’t think we would have won the gold medal.”

And, as much as the dream today is a Memorial Cup, Clarke’s long-term dream is in Los Angeles. He says it wasn’t easy being released to play for Team Canada, but looking back, he says the team made the right call.

“They knew I’d be a key contributor. They knew I’d help the team get to the gold medal. And so, yeah, I’m really happy they made that choice for me. And when September rolls around again, I’m just going to try to impress them again and try to crack that roster.”

It may not be a difficult chore. From his first days at training camp to his first game against Seattle, he says the Kings have been supportive.

“There’s a really good group of guys in L.A. and they kind of calmed me down. They all talked to me individually saying, ‘hey, you’re supposed to be here, you know, just do your thing’.”