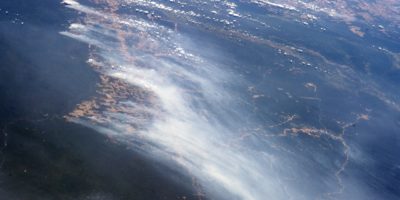 Brazil’s President Jair Bolsonaro has fired back at critics around the world who are outraged by the fires raging across the Amazon rainforest. He called the global alarm “sensationalist” and warned foreign governments not to meddle in the territory.

Bolsonaro, a right-wing populist, has dismissed protections for the Amazon rainforest — a vast ecosystem known as the “lungs of the planet” — as a barrier to economic development. Since taking office in January, he has encouraged farmers, loggers and other developers to clear land in the Amazon, speeding up the rate of deforestation and destroying the land of indigenous peoples.

Environmentalists say humans are the root cause of these Amazon fires — many were deliberately set to clear the forest for large-scale agriculture, though wind and heat helped them spread. Now, the Brazilian government is defending itself as activists and political leaders around the world are seeking urgent action.

On Thursday, French President Emmanuel Macron called the fires an “international crisis” and urged leaders at the G-7 summit to prioritize the fires during their discussions in France this weekend.

“Our house is burning,” Macron tweeted. “Literally. The Amazon rain forest — the lungs which produces 20% of our planet’s oxygen — is on fire.”

Our house is burning. Literally. The Amazon rain forest – the lungs which produces 20% of our planet’s oxygen – is on fire. It is an international crisis. Members of the G7 Summit, let’s discuss this emergency first order in two days! #ActForTheAmazon pic.twitter.com/dogOJj9big

Bolsonaro responded to the criticism on Twitter. “I regret that Macron seeks to make personal political gains in an internal matter for Brazil and other Amazonian countries,” he wrote. “The sensationalist tone he used does nothing to solve the problem.”

Canadian Prime Minister Justin Trudeau supported Macron’s plea, tweeting: “We need to #ActForTheAmazon & act for our planet — our kids & grandkids are counting on us.” But climate skeptics attending the summit — including President Donald Trump and U.K. Prime Minister Boris Johnson — may not agree.

Bolsonaro also accused Macron of a “colonialist” mindset for attempting to bring the issue to the forefront of the summit. Brazil is not a member of the G-7, nor are other Amazonian nations like Bolivia or Peru.

“These countries that send money here, they don’t send it out of charity … They send it with the aim of interfering with our sovereignty,” Bolsonaro said Thursday, Reuters reported.

Other Brazilian officials have accused media outlets and foreign leaders of exaggerating the devastation for personal gain. However, Bolsonaro admitted that Brazil does not have the resources to fight the fire on its own.

“The Amazon is bigger than Europe, how will you fight criminal fires in such an area?” he said, according to Reuters. “We do not have the resources for that.”Amazon rainforest burning at record rate, engulfing Bolsonaro in controversy

Germany and Norway have decided to withhold $60 million meant for rainforest sustainability projects until the Brazilian government changes its stance on developing the region, the Associated Press reports.

Earlier this week, Bolsonaro suggested, without any evidence, that nonprofit groups may have set the fires themselves in an act of retaliation. He admitted Thursday that farmers may be to blame for the increase in fires. News agencies reported Friday that he said he’s considering sending the Brazilian army in to fight the fires.

“The unprecedented fires ravaging the Amazon are an international tragedy and a dangerous contribution to climate chaos,” Amazon Watch program director Christian Poirier said in a statement. “This devastation is directly related to President Bolsonaro’s anti-environmental rhetoric, which erroneously frames forest protections and human rights as impediments to Brazil’s economic growth.”

Brazil is struggling economically, and the potential provided by Amazonian land has grown more alluring, despite warnings from scientists about the dangers of deforestation. The Amazon, which covers more than 2 million square miles across nine South American countries, is the largest rainforest in the world. It produces 20% of Earth’s oxygen and is considered vital to combating climate change.

There is also growing concern for indigenous peoples living in the region, and the effect the wildfires will have on their homes. Balsonaro recently shifted authority over indigenous peoples from the government’s official indigenous rights agency to the agriculture ministry, which could significantly impact their long-term protections.  Major environmental organizations are seeking donations of any amount to assist in their efforts to protect the Amazon.