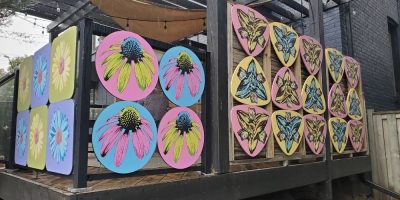 Nine restaurant patios in Barrie’s downtown now have temporary art installations displayed on their patio fencing as part of the Brightening Barriers public art project, which pairs local and regional artists with business owners. The exhibition is on display until September 30, 2022.  ​

“Building on last year’s success, this project is returning once again to bring a free and accessible cultural component to our community,” says Stephannie Schlichter, Director of Economic and Creative Development. “The exhibition animates the downtown corridor with points of interest along Dunlop and Collier Streets, encouraging residents and visitors to explore downtown Barrie and support local businesses while appreciating the original works of art.”

The participating downtown patios and featured artworks are:

The Brightening Barriers project was organized by the Barrie Public Art Committee, a working group whose goal is to enhance Barrie with art and encourage residents and visitors alike to visit public spaces. Elevating civic pride through public art, preservation of historic buildings, and programming of public spaces is also identified as one of the key themes in Barrie’s Official Plan.

To learn more about artworks on display as part of this project, visit “Brightening Barriers” via barrie.ca/PublicArt.