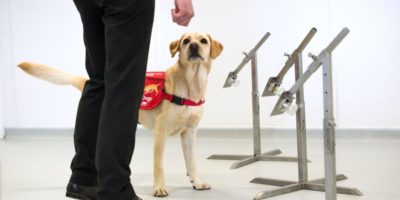 As if dogs weren’t good enough to humans already — some researchers think specially trained canines could help in the fight against the COVID-19 pandemic. A team of researchers in the U.K. hopes to train dogs to literally sniff out the disease.

Trained dogs are capable of detecting other medical conditions including diabetes, Parkinson’s disease, malaria and even cancer.

Since there is a widespread need for more COVID-19 testing, researchers from the London School of Hygiene and Tropical Medicine, the nonprofit Medical Detection Dogs, and Durham University say they have “begun preparations to intensively train dogs so they could be ready in six weeks.”

“Our previous work demonstrated that dogs can detect odours from humans with a malaria infection with extremely high accuracy — above the World Health Organization standards for a diagnostic,” Professor James Logan said in a press release.

Logan noted that using odour detection for COVID-19 is still in the early days and scientists do not know if the disease even has a specific odour yet, “but we know that other respiratory diseases change our body odour so there is a chance that it does.”

If it works, the researchers believe dogs could be used to supplement ongoing testing efforts and could help “triage” up to 250 people per hour with non-invasive screening.

Medical Detection Dogs, a U.K.-based charity that works with dogs to help detect disease or assist with managing life-threatening medical conditions, says the canines will be trained the same way other detection dogs are taught. First, they sniff samples in a training room and indicate when they’ve found the scent they’re looking for.

Then the dogs would be tasked with detecting the scent on people, working the way a Medical Alert Assistance Dog would, the charity explained on social media. Medical Detection Dogs also shared a link to the crowdfunding website the research team is using to help get this project off the ground. As of Thursday, their campaign had 102 backers and raised $5,260.

The aim is for the dogs to be able to detect the virus in even asymptomatic people, to determine whether they need to be tested, Dr. Claire Guest, CEO and co-founder of Medical Detection Dogs, said in the press release.

“In principle, we’re sure that dogs could detect COVID-19,” Guest said. “We are now looking into how we can safely catch the odour of the virus from patients and present it to the dogs.”

Dogs can also detect subtle changes in skin temperature, which means they could potentially tell if someone has a fever, the researchers say. They suggest trained dogs could be used at travel checkpoints to identify if people entering the country have a fever.

If the research is successful, the dogs could be used to help prevent a re-emergence of coronavirus after the current epidemic is brought under control, Professor Steve Lindsay at Durham University says in the press release.

feature image via London School of Hygiene and Tropical Medicine