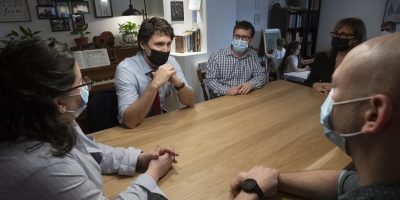 Earlier in the day, the Bank of Canada raised its key interest rate by half a percentage point to one per cent — its highest rate hike in more than 20 years — which is expected to increase the cost of bank loans, including variable−rate mortgages.

Following the Bank of Canada’s announcement, several large banks said they would raise their interest rates. Both TD Canada Trust and RBC Royal Bank said Wednesday they would increase their prime rates by half a percentage point.

“In the budget we put forward a plan to address the housing crisis that too many families are living through,” Trudeau told reporters in a suburb north of Montreal, responding to a question about the interest rate hike.

As well as a tax−free savings account that can be used for the purchase of a first house, he said the budget for the 2022−23 fiscal year includes measures to double housing construction starts across the country and to “crackdown” on speculation, including by limiting market access of foreign buyers.

“We know that there isn’t any one thing any government can do,” he said about the high cost of living in Canada. “Every family is a different situation, and the approach we take has to be multi−faceted.”

In the city of Laval, where Trudeau visited Wednesday, the median price of a single-family home has risen 67 per cent over the past five years, to $559,000, according to a recent report by the Quebec Professional Association of Real Estate Brokers.

The prime minister also responded to accusations by federal Tory leadership candidate Pierre Poilievre, who has said municipalities across Canada are helping to keep housing prices high by causing construction delays and adding costs. Poilievre wants the federal government to pressure cities to reduce bureaucracy and lower the costs involved in building homes.

Trudeau said his government is investing billions of dollars and partnering with cities to accelerate housing starts, “instead of talking about it, as some Conservatives are doing.”

“It’s good to see other parties agreeing with us that that’s the best path forward,” he added.

Later in the day, Finance Minister Chrystia Freeland addressed the Greater Vancouver Board of Trade, touting a $4−billion investment included in the budget to accelerate housing construction starts. She said the “Housing Accelerator Fund” will help municipalities modernize their housing−permit systems, including by helping them make the jump from paper to digital permits.

“There are lots and lots of municipalities across the country that are ready to issue more housing permits, but their systems are not allowing them to issue permits as quickly as they would like,” Freeland said.

At a separate event on Wednesday, in Surrey, B.C., Freeland said her government’s decision in 2016 to raise the requirements to obtain mortgages is paying off now that the central bank’s key interest rate is rising. The 2016 so−called “stress test” ensured borrowers could afford to repay loans if interest rates increased.

Non−housing−related measures, such as the Canada Child Benefit and the recently signed agreements with the provinces to reduce daycare fees, would also help families that are struggling to pay their mortgages, Freeland added.

Still, she said, the federal government doesn’t believe it can solve housing affordability on its own, or with a single budget.

“It’s really important for us to recognize there is no single silver bullet,” Freeland said. “This is a long−term challenge and we’re going to have to keep investing in it year after year after year.”

— With files from Hina Alam in Vancouver.