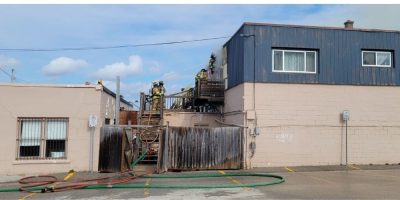 One person was killed and a second individual suffered second-degree burns in an apartment fire at 475 Dominion Avenue, between Midland Avenue and King Street, in downtown Midland.

OPP says officers spotted a structure engulfed in flames just before nine Friday morning. Police say the officers contacted the fire department and then used their fire extinguishers in an attempt to reach people trapped in the apartments above the vacant retail store. One male occupant was located and removed from the building. Fire Chief Paul Ryan tells Barrie 360 he suffered second-degree burns.

Despite heavy smoke, Ryan says firefighters were able to enter the structure and pull out a female. Unfortunately, the 51-year-old died of her injuries.

The two first responding OPP officers were treated at hospital for smoke inhalation and later released.

The Ontario Fire Marshall has been contacted.

The cause of the fire and the damage total is unknown.