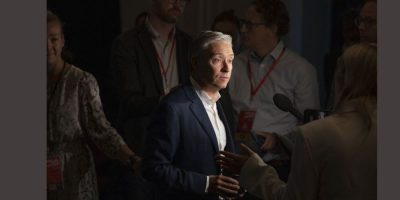 When Innovation Minister François-Philippe Champagne gets in front a microphone to talk about electrifying Canada’s auto industry, he has a favourite line to sum up his efforts to attract global investment: “Not everyone in the world wakes up thinking about Canada.”

His job, as he sees it, is to change that.

“I never stop,” the 52-year-old former lawyer and business development strategist said in an interview. “You know me. I’m pretty persistent.”

Champagne is a ball of energy, earning him the affectionate nickname “Franky Bubbles” among some Ottawa types. Interviews with him are like trying to keep up with a family of squirrels under an oak tree in October.

Since he took over the Innovation portfolio in January 2021, at least 10 different companies have announced $15.7 billion in total investments in Canada to make electric vehicles, the batteries that power them, or the minerals and materials that go into those batteries.

His persistence has found him flying around the world, bringing the case for Canada to some of the biggest technology and automotive companies in the world: Volkswagen, Mercedes-Benz, Mitsubishi, Suzuki, Panasonic, Hitachi and Subaru, to name a few.

Some, like Honda and Toyota, already have a production presence in Canada. Most don’t.

Champagne said Canada needs to be more aggressive at believing it can attract new companies.

Nobody on his team could remember the last time Canada had discussions with German automakers at the senior executive level, he said. He threw open that door first with the CEO of Volkswagen Canada Group, which oversees its dealerships.

He said that led to him spending two days with the CEO of Volkswagen in Germany, a company that produces 30 million cars every year.

“And now we’re texting each other,” said Champagne.

In August, when Prime Minister Justin Trudeau hosted German Chancellor Olaf Scholz for a state visit, Volkswagen and Mercedes-Benz both signed agreements with Canada to explore partnerships in the electric vehicle supply chain.

“It’s pretty amazing that in a couple of months we’ve gone (from) basically a very limited relationship apart from the dealerships in Canada, to the highest level where we signed with the German chancellor, the prime minister of Canada, myself, and (Volkswagen chairman) Herbert Diess.”

Champagne was selling Canada’s electric vehicle industry in Germany in May, in Japan in July, and in Detroit in September. In November he has meetings planned in South Korea.

A few weeks ago he flew to Fremont, Calif., to tour the Tesla plant. Rumours of a Tesla expansion into Canada are rampant and Champagne is coy, saying only to stay tuned.

Evan Pivnick, a program manager at Clean Energy Canada, said the country has come an incredible distance in building its electric vehicle and battery supply chain in the last year and “Champagne and his team absolutely deserve credit.”

“I think where we started the year, we are so vastly ahead of what most industry folks would have predicted that we were able to achieve,” he said.

But Pivnick said there is still much more to do if Canada is going to stay in competition to become a powerhouse in the sector.

His firm recently issued an analysis saying that, with the announcements made in the last two years, the industry will be supporting between 60,000 and 110,000 direct and indirect jobs and contributing between $12 billion and $19 billion to the national economy by 2030.

It requires a rapid expansion of electricity supply to power everything with clean energy, given that one of Canada’s biggest selling points abroad is the abundance of clean power.

Pivnick said it also requires a workforce transition plan — something the Liberals have been promising for years but have yet to deliver.

“We need to start working on worker transition right now, so that the autoworker today is an electric vehicle assembly worker tomorrow,” he said.

“We need new skills in battery material manufacturing, figuring out how oilpatch workers can work in chemical industry in Alberta. Like there’s all sorts of really cool opportunities, but they’re not just going to happen.”

All of Canada’s auto plants are in the midst of some level of retooling for electric vehicles, though none have promised a complete conversion. Multiple new and expanding mining projects are either underway or in discussion. At least four battery materials plants are in the works.

Pivnick said Canada needs at least one more major gigafactory and two or three smaller ones by 2030. It also needs to push domestic demand for electric vehicles higher, and hope that the United States can do the same.

Most people think of southern Ontario when they think of Canada’s auto sector, but there is a geographical expansion underway. Two of the battery material plants in construction are in Bécancour, a small city of 12,000 people about halfway between Montreal and Quebec City.

In July, Belgium’s Umicore announced a $1.5-billion investment to build a cathode materials production plant just outside of Kingston, Ont.

Kingston and the Islands Liberal MP Mark Gerretsen said the plant is huge for the region, which is heavily dependent on public service jobs in health and education.

Champagne said the electric vehicle supply chain is a “golden opportunity” for Canada with “dire consequences” for workers if we don’t seize the moment.

But after the success of the last two years, he said, the world has taken notice.

This report by The Canadian Press was first published Oct. 16, 2022.