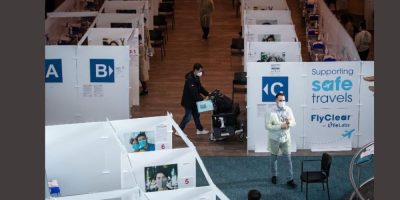 Transport Minister Omar Alghabra has announced that the government will pause all mandatory random COVID-19 tests at Canada’s airports for vaccinated travellers from Saturday until the end of the month.

For now, unvaccinated travellers will still be tested at airports, but the government plans to move that testing off-site next month.

The government previously said current public health measures would remain in place until the end of June, but has been facing mounting pressure from industry and opposition to improve the chaotic situation playing out in Canada’s airports.

“The government of Canada recognizes the impact that significant wait times at some Canadian airports are having on travellers,” Alghabra and his fellow ministers said in a statement Friday.

Travel and tourism groups blame recent havoc at Canadian airports on the COVID-19 surveillance measures undertaken when passengers attempt to pass through customs.

While the public health measures were manageable during the heat of the pandemic when far fewer people were travelling, the roundtable says it’s not sustainable given the current demand for flights.

Toronto Pearson International in particular was dubbed “hell on earth” by former NHL player and podcast host Ryan Whitney in a viral video posted earlier this week. Other travellers report hours-long lineups, being held on the tarmac without food or water while waiting for their turn to enter the airport, missed connections and delayed flights.

A roundtable of travel and tourism groups, including Canada’s airports, has all but begged the government to lift randomized COVID-19 tests from airports before June 15, when travel season is expected to really take off.

“We do a randomized sample to select people coming from different areas of the world and are able to detect variants of concern,” Tam said at a public health briefing.

While cabinet is responsible for mandating COVID-19 measures, Alghabra has recently said the politicians are “following the science” on the issue and receiving advice from public health experts.

The tourism roundtable has also called for the government to remove COVID-19-related questions from the ArriveCan app to speed lines up at the airport. Instead, the government announced it would station extra Public Health Agency of Canada workers at airports to verify that travellers have completed the questions and offer help to those who need it.

The government also recently announced it would attempt to hire more screening officers to help alleviate the long lines travellers have experienced for weeks.

The government has not made changes to its vaccine mandate for domestic and international travellers.

Banner image: A traveller stops to be tested for COVID-19 at the testing centre for arriving international passengers at Vancouver International Airport, in Richmond, B.C., on Dec. 2, 2021. THE CANADIAN PRESS/Darryl Dyck