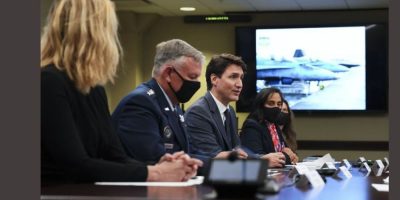 Defence Minister Anita Anand committed billions in new spending over the next 20 years to modernize North America’s aging defensive systems in an announcement on Monday that was big on promises, but lacking several important details.

Chief among them: Exactly when those investments will actually address what senior Canadian and American military officials have been warning for years is a dangerous gap in their ability to detect and stop an incoming attack on the continent.

Standing on the tarmac of Canadian Forces Base Trenton in front of several military aircraft, including a CF-18 fighter jet specially flown in for the purpose, Anand announced that Canada will be investing $4.9 billion over six years on continental defence.

“This is the most significant upgrade to Norad, from a Canadian perspective, in almost four decades,” she said in reference to the shared U.S.-Canadian system used to identify attacks from land and sea on North American soil.

“In addition to these immediate investments, this plan is funded for the long term. This plan has a total value of approximately $40 billion over the next 20 years. And it will deliver new capabilities to protect Canadians for generations to come.”

The minister went on to list five areas in which those investments will focus, starting with the establishment of a new “layered” surveillance system that will include long-range radars and sensors capable of detecting incoming threats from over the Arctic.

The new system will replace the North Warning System, a string of radars built in Canada’s Far North in the 1980s to identify approaching Russian bombers that represents the backbone of this country’s contribution to Norad.

Yet neither Anand nor chief of the defence staff Gen. Wayne Eyre or Lt.-Gen. Alain Pelletier, the deputy commander of Norad, were able to say exactly when the North Warning System will be replaced.

That is despite Canadian and U.S. military officials having warned for years that it is now all but obsolete thanks to recent developments in long-range missiles — a concern that has grown significantly following Russia’s invasion of Ukraine.

“As we have more information about the precise timing of the changeover from one system to another, we will make that clear,” Anand said when asked about the lack of timeline.

“At this point, what we are introducing is that we will be moving to a new surveillance system. And until that time, the North Warning System will remain in place and will be operated and maintained.”

Pelletier acknowledged the “limitations” of the North Warning System in a separate interview with The Canadian Press, particularly in terms of detecting cruise missile attacks from long-range bombers flying over the Arctic.

“The reality right now is that long-range aviation has an ability to launch cruise missile outside of the North Warning System’s detection range,” he said. “So that’s the challenge.”

There have been some hints as to when new radars will come online. In March, industry officials were told that the military was hoping for an over-the-horizon radar system to be up and running by 2028-29, at an estimated cost of $1 billion.

However, that program is in its infancy, and Pelletier acknowledged that other parts of the anticipated system are still being worked out from a technological perspective.

Yet none of those initiatives announced by Anand included price tags, let alone timelines for when they will be fielded.

It also wasn’t clear how much the U.S., whose officials have been quietly — and in some cases not so quietly — pushing Canada to move on Norad modernization, will contribute to the effort.

In a measured statement, U.S. Ambassador to Canada David Cohen underscored the importance of modernizing Norad while welcoming the government’s commitments “to ensure the continued defense and security of North America.”

“The United States looks forward to continuing to strengthen our collaboration with Canada on continental defense and security, including in the Arctic.”

But NDP defence critic Lindsay Mathyssen described the minister’s announcement as little more than “vague promises,” as she accused the Liberals of having failed to act with the necessary urgency.

While Monday’s announcement followed months of promises that the government would unveil a “robust package” of investments for continental defence, it also came days before Prime Minister Justin Trudeau attends a NATO summit in Spain.

Leaders of the transatlantic alliance are expected to reveal their plans to spend at least two per cent of their national gross domestic product on defence — a target that Canada has not only failed to meet, but quietly refused to recognize.

University of Manitoba associate professor Andrea Charron, one of Canada’s foremost experts on Norad, did not believe it was a coincidence that the government was announcing billions of dollars in new military spending ahead of the meeting.

“Clearly the timing is so that they can also go to Madrid and say: ‘Look, we are contributing or planning to contribute more money,’” Charron said.

Yet while the lack of specific details and timelines also stood out to her, Charron said Monday’s announcement really is the first step in what will be a long process that will involve negotiations with not only the U.S., but northern Indigenous communities.

“Many of the assets are going to be on Indigenous land,” she said. “And we know how crummy (the government) can be at speaking to the right people, and those conversations take a lot of time.”

Anand during her opening address emphasized that the government would work closely with Indigenous and northern communities, in particular, while boasting of the potential economic benefits from the promised Norad upgrades.

“We are resolutely committed to working with Indigenous and northern communities, to meeting our legal obligations,” she said.

“As we build new infrastructure, engage in research and development and create new economic opportunities, we will work alongside local communities to make sure that our investments not only meet the needs of our military, but also serve Indigenous and northern communities.”

This report by The Canadian Press was first published on June 20, 2022.