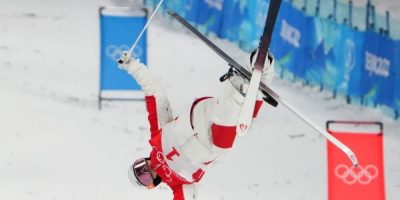 Canada has won a pair of medals at the Beijing Olympics.

Freestyle skier Mikael Kingsbury took silver in the moguls event. The defending champion had a score of 82.18 after losing to an opponent from Sweden in Saturday’s final.

Earlier on Saturday, Canada picked up its first medal of the games as Ottawa’s Isabelle Weidemann captured bronze in the women’s 3,000 metres long-track speedskate event.

Weidemann finished in 3 minutes 58.64 seconds on Saturday and was first before both skaters in the final pairing beat her.

Banner image: Mikael Kingsbury, of Canada, competes in the heats during the men’s moguls at the 2022 Winter Olympics in Zhanqjiakou, China on Saturday, February 5, 2022. (Seak Kilpatrick/THE CANADIAN PRESS)

Mikael Kingsbury, of Canada, competes in the heats during the men’s moguls at the 2022 Winter Olympics in Zhangjiakou, China on Saturday, February 5, 2022. (Sean Kilpatrick/THE CANADIAN PRESS)