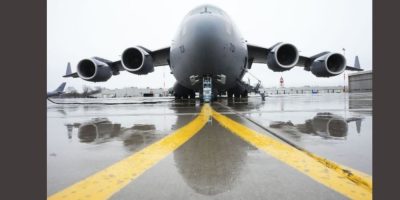 Members of the Canadian Armed Forces will depart from an Ontario military base in the coming days to help with the care, co-ordination and resettlement of Ukrainian refugees in Poland.

Defence Minister Anita Anand says up to 150 troops will soon deploy from Canadian Forces Base Trenton after a reconnaissance team visited Poland last week to plan for the mission.

More than 2.6 million people have fled to Poland from Ukraine since Russia invaded in February.

Anand says the troops will provide general and spiritual support as well as limited medical care.

Speaking at the base today, Anand says troops will also help Ukrainians leave Poland for other destinations, including Canada.

Canada has prioritized immigration applications from Ukraine and created a special program that lets Ukrainian citizens and their families come to Canada and work or study for three years.

She says Canada will keep working with allies to respond effectively as the crisis unfolds.

The Canadian Armed Forces previously had 260 military trainers in Poland after they were evacuated from Ukraine shortly before Russia launched its invasion on Feb. 24.

The trainers provided some humanitarian assistance during the early weeks of the conflict but have since been relocated back to Canada on what the military says is a temporary basis.

Since the war started, Canada has provided millions of dollars in loans to the Ukrainian government along with military weapons and equipment for its military.

The government has also sanctioned hundreds of Russian political and business leaders, and called for the International Criminal Court to investigate the country for war crimes and crimes against humanity.

This report by The Canadian Press was first published Apr. 14, 2022.