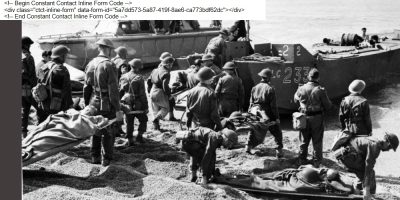 By Sarah Ritchie in Ottawa

With the help of a cane, 100-year-old Gordon Fennell rose to his feet in the Square du Canada, a park near the coastline in Dieppe, France, where the former soldier came ashore 80 years ago. The crowd of local residents, students and dignitaries gave him a standing ovation on a grey, rainy Friday.

As a 20-year-old member of the Calgary Tanks regiment, Fennell was one of around 5,000 Canadian soldiers sent onto the beaches in an attempt to breach the Nazi-occupied town from the sea on Aug. 19, 1942.

But the raid was disastrous from the start. In just over nine hours, more than 900 Canadians were killed. Some 1,946 were taken prisoner and most remained captive until the end of the war. Many of the 2,210 who returned to England were wounded.

The objective of the Canadian soldiers, along with their British and American allies, was to test the enemy’s defences, damage its port facilities and gather important intelligence to help defeat Nazi Germany. Some historians now believe it was a cover for a pinch operation, as Allied forces tried to capture an enigma machine, which would enable them to read coded German messages.

Ultimately, whatever the intent, the operation was a failure.

“You could call it a noble failure,” said military historian Michael Bechthold.

Fennell was one of the lucky ones who managed to escape back to England. He had another near-brush with death during the Italian Campaign in 1943.

“My wife-to-be was instrumental in saving my life,” Fennell recalled in a video provided to the Canadian War Museum as part of its exhibit called “Forever Changed.”

He met Joyce Cobb while stationed in England, and eventually asked her to marry him. “I didn’t want to get married in Army boots, so I asked my mother to send me some shoes for the wedding.”

They were delivered while he was in Sicily, and Fennell kept them in the tank near his head. About eight months later, the tank was destroyed in an attack.

“Shrapnel went through the soles of the shoes and through my earphones and into my head,” Fennell said. “And so I wrote to my wife and said, ‘If you hadn’t agreed to marry me, and set a chain of events going, I wouldn’t be writing to you today. Even though you’re away in England, by agreeing to marry me you saved my life.'”

Fennell hung onto that lucky pair of shoes, donating them to the War Museum.

He is today one of the very few remaining survivors of one of the best-known and deadliest events of the entire war for Canada.

Prime Minister Justin Trudeau commended Canadian and Allied soldiers who took part in the raid for their exceptional heroism, resilience and courage. “Lest we forget,” he said in a statement Friday.

But the way Canada and other countries remember these significant anniversaries of the First and Second World War may be changing as most of the tangible connection to them is lost.

“I think it’s absolutely amazing there are still veterans around that are in good enough shape to travel,” said Bechthold.

“We have to take advantage of the opportunity to to honour these men, to fete them, to talk to them, to learn about their experiences. Because once they’re gone, they’re gone.”

Of the more than one million Canadians who served during the war, it’s estimated about 20,000 are still alive today, and their average age is 95.

Bechthold was part of a delegation that commemorated the 75th anniversary of D-Day in 2019 along with about 30 veterans, some of whom were returning to European soil for the first time.

“You could see it in their eyes, you could see them sort of reliving the experience, the trauma, the loss, the sacrifice, especially during the visits to the cemeteries.”

The military history classes he teaches remain popular, but he said his undergraduate students today regard even 9/11 as a historical event — it happened before they were born — so “I think we have our work cut out for us making sure that these events stay in their consciousness.”

Dieppe’s Mayor Nicolas Langlois presented Fennell with the city’s medal of honour and that of the French National Assembly on Friday, adding to the collection of medals he wore proudly on his chest. In French, Langlois explained that the gesture represents Dieppe’s eternal gratitude to every soldier who fell into the cruel trap of Operation Jubilee.