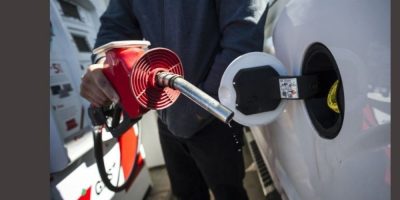 By Mia Rabson and Stephanie Taylor in Ottawa

The higher price of crude oil is to blame for surging prices at the pump, Canada’s natural resources minister argued as he pushed back against Prairie premiers who had called on the Liberal government to suspend an increase in the federal carbon price.

“The truth is that 94 per cent of the price of gas has nothing to do with the price on pollution,” Natural Resources Minister Jonathan Wilkinson wrote to the premiers of Alberta, Manitoba and Saskatchewan on Friday, when the carbon price rose by another $10.

“The vast majority of the price increase that Canadians are seeing at the pumps right now is driven by crude oil prices going up — largely because of Russia’s illegal invasion of Ukraine.”

Wilkinson said the federal carbon price charged to consumer goods like fuel translates to about six per cent of gas prices.

He also said most of those paying the federal carbon levy receive more money in return through rebates sent annually that, starting this year, will be changed to quarterly payments.

They argued families were facing levels of inflation not seen in decades and anything that could further drive up fuel prices was not appropriate.

Friday’s scheduled increase adds another 2.2 cents to the cost of a litre of gasoline, or 11 cents total.

But British Columbia, New Brunswick and Prince Edward Island are also raising their provincial carbon levies to stay in line.

Quebec and Nova Scotia use cap-and-trade systems and Newfoundland and Labrador will raise its price to $50 a tonne later in 2022.

Only the four provinces directly involved in the federal system receive the rebates, which are intended to prevent families from hurting financially for paying the carbon price while still having an incentive to save more money by using less greenhouse gas-emitting fuel.

The payments vary by province depending on the amount of fossil fuels used, and range from a low of $745 this year in Ontario, to $1,101 in Saskatchewan.

For the first time, those cheques will be distributed throughout the year instead of in a single payment, with a double payment coming in July this year and quarterly payments following in October and January.

Other provinces have various plans for the revenues including tax credits, gas tax rebates, climate action grants or some combination of those.

Environment Minister Steven Guilbeault withstood political pressure, including from those Prairie premiers, to delay or cancel thehike in the face of surging fuel prices.

Guilbeault previously said the Liberal government was not going to stall or move backward on its climate action plan, of which the carbon price is seen as a “cornerstone” policy.

The Conservatives pushed a motion last month asking the Liberals to delay or cancel the planned increase April 1 because gas prices have risen so much already.

Several Conservative leadership candidates are pushing the same and are also promising to do away with the carbon price entirely if they win the leadership and then form government after the next election.

That includes MP Pierre Poilievre, who attracted a crowd to Ottawa for a rally Thursday evening to “axe the carbon tax.”

According to the Canadian Automobile Association, the average price for gasoline nationally on March 31 was $1.72 per litre, up from $1.22 per litre on April 1, 2021.