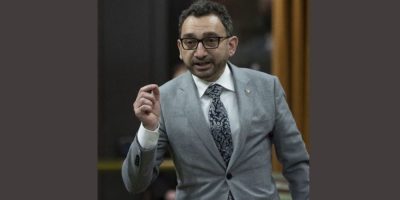 The federal government is expanding the number of electric vehicles that qualify for the purchase rebate as it makes good on its promise to include some of the new SUVs and pickups arriving in the electric vehicle market.

Transport Minister Omar Alghabra said Friday about four in five Canadians are interested in making their next vehicle purchase an electric model but because the purchase prices are still a little higher than conventional gasoline cars, they need a little help to nudge them along.

“We know that the future of our transportation sector has to be green,” he said. “And the future is zero-emission vehicles.”

Later this year, the Liberals intend to mandate that by 2026 one-fifth of vehicles sold must be electric. Half of sales must be electric by 2030, and by 2035, no new gas-powered vehicles will be allowed.

The recent budget added another $1.7 billion to the popular incentives for zero-emissions vehicles program. Since 2019, the program has doled out more than $611 million in rebates to more than 141,000 car buyers.

Initially, the maximum purchase price of a vehicle to qualify was $45,000 and up to $55,000 with options. Vehicles with at least seven seats could qualify with a maximum price of $55,000.

Battery-electric, plug-in hybrid and fuel-cell vehicles that can travel at least 50 kilometres on a single charge will qualify for $5,000. Those that get a shorter range can get $2,500. Previously, only fully electric vehicles could get the maximum amount, while plug-in hybrids got the smaller rebate.

Canadians are big fans of big cars, particularly SUVs and crossovers, which last year accounted for 55 per cent of every new passenger vehicle registered. Pickups made about 21 per cent, and cars 20 per cent.

Until recently, almost all electric vehicles were small passenger cars or small crossover SUVs. There are more than a dozen pickups and bigger electric SUVs and crossovers arriving on the market in the next two years, but their price tags are above the old qualifying limit.

Adjusting the limit added some new SUVs to the list, such as the plug-in hybrid Jeep Wrangler, and the Lincoln Corsair Grand Touring.

But the first electric pickups expected in Canada aren’t currently on the list. The Rivian R1T, with a suggested base price of more than $86,000, is well over the qualifying limit. So is the F-150 Lightning, which is currently starting at $68,000.

Joanna Kyriazis, clean transportation program manager at Clean Energy Canada, said the expanded program will help overcome sticker shock on electric vehicles for many people, but the makers of popular cars whose prices aren’t within the limit should take note.

She said Ford is offering a cheaper F-150 Lightning in the United States, for example.

A spokeswoman for Alghabra said Ford applied for an F-150 truck to be included in the program earlier this week and that application is being reviewed now.

The Tesla Model 3 has been the most popular electric vehicle in Canada, accounting for more than 40 per cent of the rebates given to date. Tesla initially priced its Model 3 just below the qualifying price for the rebate, but last fall hiked the price tag, citing rising supply costs, and it fell out of contention.

Tim Reuss, president of the Canadian Automobile Dealers Association, said it is disappointing the government isn’t increasing the size of the rebate.

“Simply increasing the limits to make a few more vehicles eligible for the program without increasing the amount of the incentive doesn’t address the affordability issue — so we are disappointed,” he said.