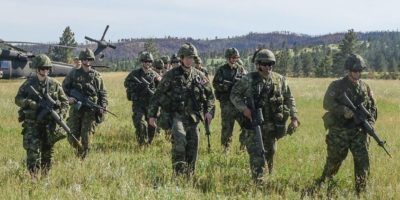 Canadian Forces Base Borden is preparing for the arrival of a number of additional soldiers, as the military gets ready to respond to requests for help during the COVID-19 outbreak.

An advisory sent out Sunday morning by the Canadian Forces said members from Joint Task Force Central (JTFC) will be moving from their various units across Ontario to CFB Borden starting on Monday.

“In Borden, these Forces will be forming a task force that will be centrally prepositioned on the base and kept ready to respond to future requests for assistance from the Government of Canada in the fight against COVID-19,” the statement reads. “JTFC is ready to support the Public Health Agency of Canada, Public Safety and other government departments in the fight against COVID-19 and other domestic crises such as seasonal flooding.”

Defence Minister Harjit Sajjan has said there are as many as 24,000 regular and reserve forces that will be ready to immediately respond to any requests for assistance related to the pandemic. This could be anything from delivering aid, supplies or other actions.