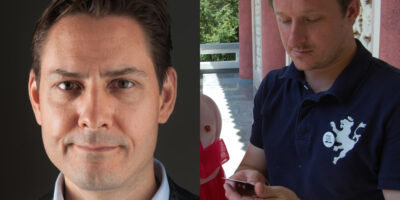 China has detained the Canadians on allegations of espionage for over 13 months.

Prime Minister Justin Trudeau was asked about the charges during his scheduled media briefing on Friday.

Speaking in front of Biscotti & Cie in Chelsea, Quebec, Trudeau expressed his support to the two men and their families.

“We’re of course very disappointed with the decision and by the steps taken by China this morning,” Trudeau said.

“We will continue to advocate for their release and safe return to Canada.”

Trudeau said Canada will continue working with allies and engage directly with China to make it clear that the two men must be allowed to return to Canada.

The Prime Minister called the charges “arbitrary” and said he understands China does not work in the same way Canada does.

The Supreme People’s Procuratorate posted statements on Friday saying charges were reached after a “legal review.”

Spavor, an entrepreneur, and Kovrig, a former Canadian diplomat working with the International Crisis Group, were arrested in May.

“Michael was not engaged in espionage, everything he was doing was open, transparent and well known to China’s authorities,” Malley wrote.

“He has become an unfortunate pawn in a larger struggle among the United States, Canada and China. But today’s charges change nothing to our resolve to secure Michael’s release and to our hope and expectation that he will soon be united with his loved ones,” Malley said.

The charges against the two men come less than a month after British Columbia’s Supreme Court dismissed an application from Huawei executive Meng Wanzhou to avoid extradition to the United States over fraud charges.