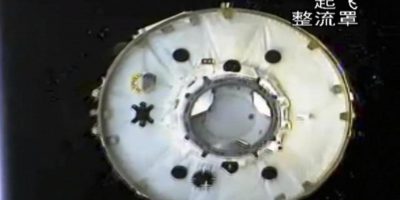 A huge piece of space junk made an uncontrolled re-entry back into Earth’s atmosphere Saturday night. The remnants of a rocket re-entered the atmosphere and crashed into the Indian Ocean north of Maldives, according to the 18th Space Control Squadron.

According to the U.S. Space Force, the remnants re-entered the atmosphere at 10:14 p.m. ET. China’s space agency said the rocket re-entered the atmosphere at 10:24 p.m. ET, but also pinpointed the landing area just north of Maldives. Peterson Air Force Base in Colorado reported the re-entry occurred at 10:15 p.m. ET and said it is “unknown if the debris impacted land or water.”

The Chinese space agency said most of the rocket was destroyed during re-entry.

The remnants were left over from China’s first module for its new Tianhe space station. The 23-ton Chinese rocket Long March-5B recently launched the first module for the country’s new space station into orbit. After the core separated from the rest of the rocket, it should have followed a predetermined flight path into the ocean.

But scientists had little idea where it would land as it orbited the planet unpredictably every 90 minutes at about 17,000 miles per hour. Its fast speed made its landing place nearly impossible to predict, but it had been expected to re-enter the atmosphere Saturday or Sunday.

Why the Chinese rocket is coming down uncontrolled is not at all clear,” said CBS News’ William Harwood. “U.S. rockets (and most others) routinely fire their engines to target re-entries over the southern Pacific to ensure debris can’t land on populated areas.”

The China National Space Administration has faced issues with re-entry in the past. In 2018, Tiangong 1, China’s defunct space station, made an uncontrolled re-entry and landed somewhere in the Pacific Ocean. In May of last year, another Long March-5B rocket fell into the atmosphere, ultimately landing near the west coast of Africa.

The most significant re-entry breakup over a populated area was the shuttle Columbia, which entered in February 2003. When 200,000 pounds of spacecraft broke up over Texas, a significant amount of debris hit the ground, but there were no injuries.

Similarly, when Skylab re-entered in 1978, debris fell over Western Australia, but no injuries were reported.

William Harwood contributed to this report