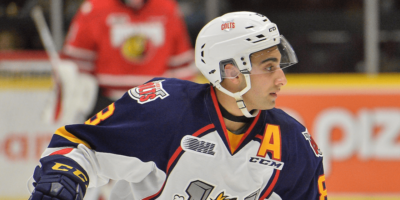 Missing the playoffs is never a good thing for a competitive hockey player.

For Lucas Chiodo, an early end to his first professional season with the Fassa Falcons of the Alps Hockey League in Italy may just have been the best thing for the Churchill native.

It was only a week later after the former Barrie Colt returned home in early March that the COVID-19 pandemic hit Italy hard and left the country in a national lockdown and reeling to deal with the crisis of a virus that has wreaked deadly havoc on the world.

As of Tuesday, the death toll from the outbreak of coronavirus in Italy has climbed to 12,428, with 105,792 cases. The Alps Hockey League would cancel its season a week after Chiodo left.

“There was talk in the room that it was getting kind of bad, but I was pretty lucky with our season ending because we didn’t make playoffs,” said the 21-year-old forward. So, it wasn’t really a problem coming back home. A week later it got pretty bad. I’m happy to be home with my family.”

With news of the spread of the virus growing and it’s deadly impact on the country, Chiodo admits it frightened him.

“A couple of weeks before going home I remember texting my mom and freaking out that I wasn’t going to be able to leave,” he said. “She had to calm me down. It definitely scares you when you hear something like that. I’m just grateful that I’m healthy and happy with my family right now.”

Located in the northern Italian region, northeast of Trento, the Fassa Valley was away from the epicentre of the outbreak at the start, but Chiodo hears that has changed as the virus has spread throughout the country now.

“Not in the area we were in, because it’s out in the mountains,” Chiodo said when asked if it was bad where he was. “But it was pretty bad in Venice and Milan. Apparently now it’s getting bad in the area I was in, so I guess it’s spreading pretty quick.”

Chiodo, who is of Italian heritage on his father’s side, pauses when asked about the growing death toll.

“It definitely hits home,” he said quietly. “You can just wish for the best and wish everyone’s healthy and happy and safe. That’s all you can really ask for.”

Chiodo has made sure to keep in contact with his Fassa teammates to find out how they are doing. He says they have a team text chain going that he checks every couple of days.

“I’ve just been texting all the guys I became friends with and just wishing them and their families are safe,” he said. “They’re saying everyone is fine, it’s just that everything is getting kind of bad in the valley. They’re kind of in lockdown, what we’re doing too.”

They often tell Chiodo to inform Canadians of how bad things can get and to take this pandemic seriously.

“Definitely,” he answered when asked of how serious the messages he gets. “This is a real serious issue in the world. I think it’s a lot worse in Europe than it is here. There are things that are a lot bigger than hockey and this is one of them and you got to take this seriously.”

It was only a short while before the pandemic hit hard that Chiodo’s parents visited him in Italy. They travelled there in October for his birthday and then again after Christmas.

“There was almost no talk of it (Coronavirus) at all,” he said when his parents were there in January. “It just kind of hit everyone at the time the season came to an end for us. It got pretty bad.”

One of the OHL’s leading scorers over his final two seasons in the Ontario Hockey League with the Colts and the Ottawa 67’s, Chiodo was a force in his first season with the Falcons. He led the team – who finished seventh among 18 teams – in scoring with 17 goals and 37 assists for 54 points in 42 games.

“It’s pretty good,” he said of the hockey played in Italy. “It’s a mix of older and younger guys, but it’s still a good pace and the ice surface is a lot bigger there than in North America and I feel my game really suited that.”

“I definitely didn’t know what to expect going over there,” he added. “Italy you kind of think of soccer, but we had a decent size rink. Our valley, the population wasn’t really that big, but the people that came to our games got really into it and they were really loud. It was definitely fun to play in front of that.”

As for returning to play with Fassa next season, Chiodo says he’s not sure.

“With this right now it makes things a little bit tricky, but it’s just something that I don’t really know what I’m going to do next year,” said Chiodo, who played nearly four-and-a-half seasons with his hometown Colts, racking up an impressive 72 goals and 192 points in 227 games before being traded to Ottawa. “If I go back there, I go back there and I’m good with that. If something comes up in North America, I’m good with that.

“I’m just going to take it one day at a time and go from there and see what happens.”

For now, he’s just trying to keep busy at home and follow the stay-at-home guidelines set by the Canadian government in hopes of trying to contain the spread of the virus.

“We definitely are trying to keep busy and do the best that we can,” Chiodo said of his family. “We’ve got into a couple of Netflix shows as a family, you know just trying to find anything to pass the time.”

“I think when I’m older and I look back on this, I’ll be happy that I went,” he added. “I got to experience a different culture, a different country and I have roots in Italy so I guess that made it kind of special too.”