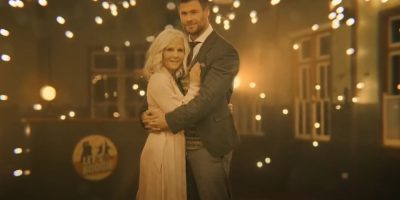 Chris Hemsworth recently went on a date with his elderly wife.

Actually, Elsa Pataky is only 46, but she dressed herself up to look like she was 87 so her husband could remember her in the future.

Late last year, Hemsworth announced that he was shocked to learn he was genetically predisposed to Alzheimer’s disease. He shared his feelings and anxieties about the news saying, “The idea that I won’t be able to remember the life I’ve experienced, or my wife, my kids ― this is probably my biggest fear.”

As a surprise, Pataky used prosthetics and make-up to age herself an extra 40 years, and the whole thing was a secret from her husband until it came to the surprise meetup.

Chris thought he was meeting an elderly fan but was shocked to see his beautiful wife with a new look.

He knew immediately it was her and said “As soon I touched your shoulder I was like ‘ I know this person.'”

After the experience, he said, “What is quite confronting is approaching that age on my own. What makes it less scary is having someone to experience it with. Having people around you that you love makes me feel a lot more accepting.”

Catch the highlights from the sweet episode below

feature image from “Limitless with Chris Hemsworth” via youtube